Kiril Prashkov is an artist equally deft in text, images and metaphors, who creates thought- and sense-provoking works. In these, he often comments on our modern day through the prism of the past and history, cultural layers and the momentum of perception.

In the faraway, yet so close 1995, Kiril Prashkov creates an enigmatic triptych titled Gravestones I, II, III, in which he tells stories that had never happened. His studio in Vienna, where he stays at the time with a scholarship from the KulturKontakt foundation, is thus inhabited by ghosts from bygone times, who have come to challenge the future.

The claim to historic accuracy is fairly reliable as regard the style of the text and the appearance of the objects. However, a close examination reveals that the tales are fabricated and the gravestone material is fake. Why the phoniness? What’s the common ground between the khan, the prince, the tsar and the ordinary migrant?

The author entangles various figures of Bulgarian national history into ironic and self-ironic fairy-tales, which have nothing to do with the truth, but „work“ perfectly in contemporary context. The strive for discovering „civilization“ is far from gone and is still on today’s agenda. It is responsible for many global tragedies, but also for many of our achievements. 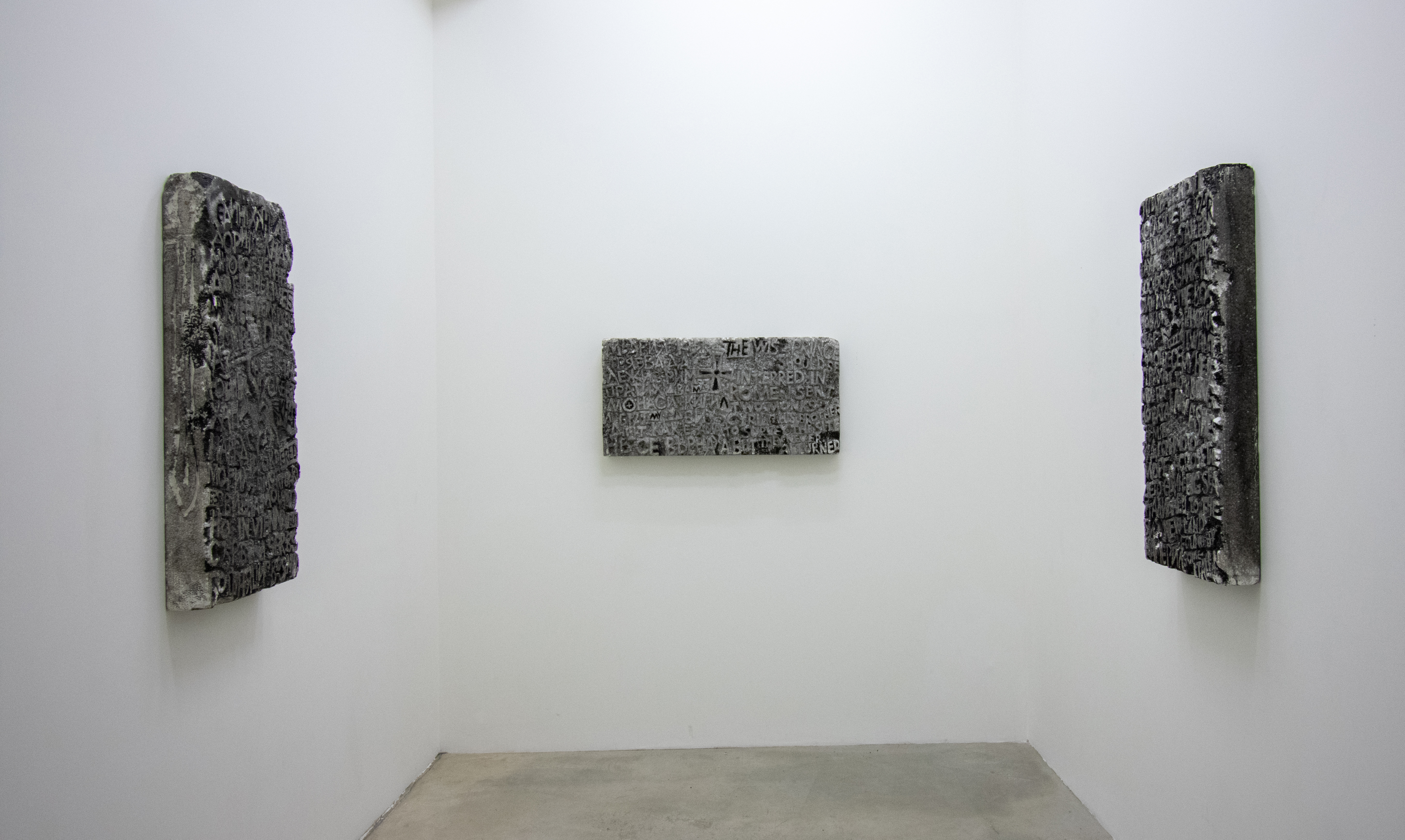 Maria Vassileva: What made you create those gravestone works?

Kiril Prashkov: The reason is clear and unclear in equal measures. At that time, 1995, I was in Vienna at the invitation of KulturKontakt, occupying a huge studio. I was given free rein to do whatever I want, which is not easy, and entertained the flattering hope to impress somebody… That wasn’t my first – two years earlier I had been in the same situation in Switzerland. There, I had dived deep in „Swiss“ topics, for instance, in Gruezi Kreuz Book, a pretty ironic, even salty explanation of „the Swissness“, until I sensed that they hadn’t invited me for that. I was a guest, with all due prerogatives, but also with the expectation that I would learn, would absorb something from the „paradise“ over there… In Vienna, a much more „Balkan“ place, I thought that self-irony would be better accepted, all the more than migration from the Balkans had already started big time. Maybe there are still people in Bulgaria who remember the weekly lists in Kultura, printed on a black background  and featuring the title”The following artists left for abroad to make a living”… Well, some of them never returned.So, back to your question, the clear reason is that you’ve been invited somewhere and you feel the need to comment on your life and your environment; in my particular case – on the „exit“ from Bulgaria. I’ll get back later to the other, not so obvious reason.

М.V.: Can you „decipher“ the inscriptions for the public, from the viewpoint of their historical consistency?

K.P.: With these gravestones my intention was to present from our, Bulgarian perspective, the topic of shifting toward „civilization“. Of course, our dream to reach it – whether by trying to attach ourselves to it, conquer it or fawn it over, has taken different turns with time. Let’s tell it like it was – in the 90s we saw it as something positive, like an opening. Besides, it seemed like we were encouraged from the outside, but we encouraged ourselves as well. The vagueness of the reason for the triptych probably comes from my sense of certain hesitation – like, why do they invite us? In 1997, when general exaltation of the opening had already settled down, the „dog artist“ Oleg Kulik sent me a question which I was to forward to other artists together with my answer. In truly canine fashion, he asked: what should an Easter European artist do – lick or bite? Well, I referred to White Fang, who is known for biting – with resolution and deadly intentions – and only licking his wounds… And I expressed an opinion that with his single-mindedness, Jack London’s famous character comes across as a relic of the past. That’s why I proposed a third option for the Eastern European artist – to laugh. I am certain that laughter is a power. Of course, it depends on who’s laughing; sometimes it may be just giggling into one’s hand. That is the difference between a metropolis like Kulik’s Moscow and provincial Sofia. So, my answer may have been a weak one, though I still stand by it.

М.V.: There is a great deal of irony in the triptych – on the one hand, the stone steles are fake, they’re made of Styrofoam. On the other, like a true modern artist you’ve made the inscriptions bilingual, in Bulgarian and in English. How would you comment on that?

K.P.: Besides irony, I would also mention a healthy dose of self-irony. First, your aspiration to move some place where you may be far from welcome; second, the realization that Styrofoam and Ytong may soon become materials for building the past; and third, the mandatory English. The great Mladen Stilinovićonce wroteAN ARTIST WHO CANNOT SPEAK ENGLISH IS NO ARTIST. Why wouldn’t that apply to other occupations, be it a khan, a prince or a tsar?

М.V.: According to you, how does your 25-year old idea relates to the situation today?

K.P.: Well, it fits right in… It has a certain relation to me, as it is one of my first works focused on text and the possibilities for its materialization. From that point on, many of my works follow exactly this line. In addition to the motto „Read more!“.

Anyway, if I may speak of my own generation, many people left Bulgaria and have managed to integrate into new, wider communities…Good for them! The sad thing is that generally, in small „principalities“ like ours, such processes logically result in provincial thinking and marginalization, which also affect the next generations. Recently in my correspondence with the Croatian curator Janka Vukmir she told me of her interest in the 1990s in the light of the rebirth of nationalisms. The time has shown that even in our country, a part of the Balkans that hasn’t been involved in a recent war like Croatia, nationalism came back to life with an equal intensity. The transformation of our country into a „tourist Orthodox monarchy“, as I defined it in 2002, only confirms this fact. Unfortunately, the present state of affairs has met both external and internal support.

М.V.: Your last words entice me to give you a provocative task. Can you describe, in one sentence each, the 80s, the 90s, the beginning of the new millennium and the present time? What have we been through and where are we headed?

K.P.: The most reasonable thing would be to answer for myself and only with regard to our narrow professional field. 1980s, the years of Perestroika: exaltation and scare of the reaction against the reforms; a scare that proved quite useful in our future activities. Besides, I married, Iara came into my world (Editor’s note: Iara Boubnova), whereupon many artistic endeavors werepushed in new, less local directions. 1990s: chaos, and within the chaos islets of meaning in-between the gaping chasms of emptiness. The most important of these islets must be the Institute of Contemporary Art, which collected and keeps on collecting authors capable to make changes to the artistic environment. The 2000s saw a reaction that follows every fundamental change diversified with a process of filling in the blanks with new „material“. On the whole, we moved ahead following, as it seems, a common spiral of movement. 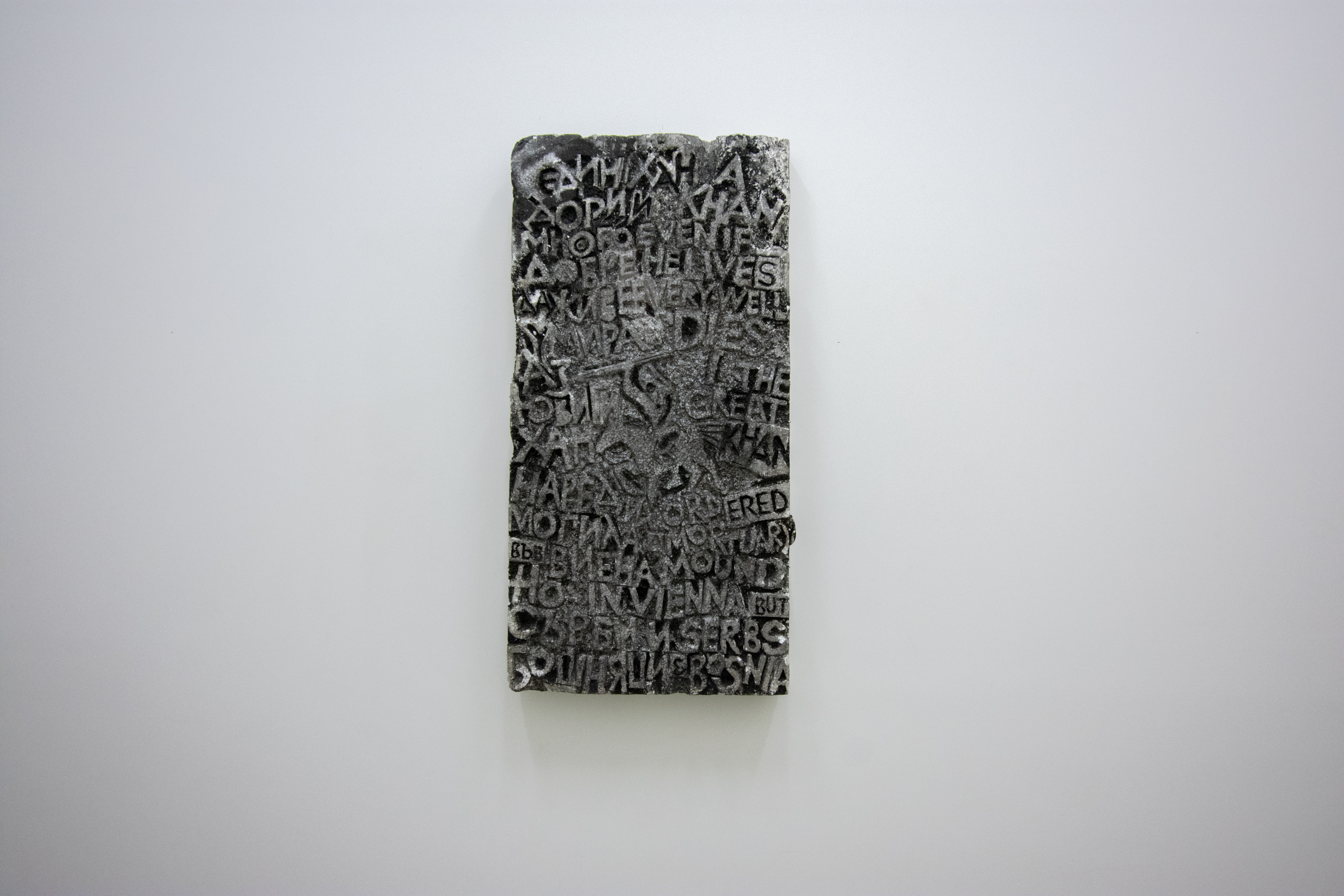 A Khan even if he lives very well dies. I, the Great Khan ordered a mortuary mound in Vienna but Serbs & Bosnia… 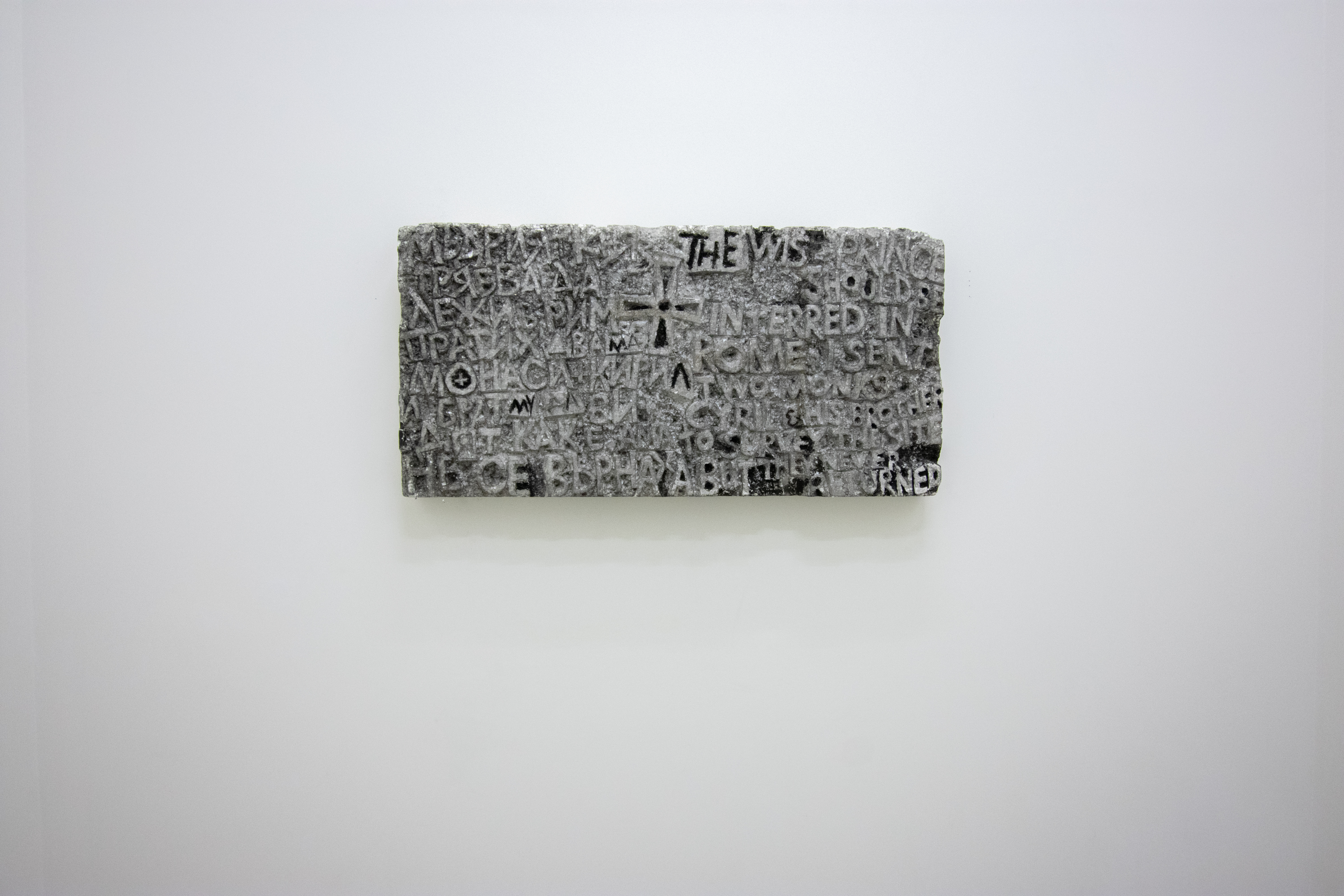 The wise Prince should be interred in Rome. I sent two monks – Cyril and his brother to survey the site but they never returned 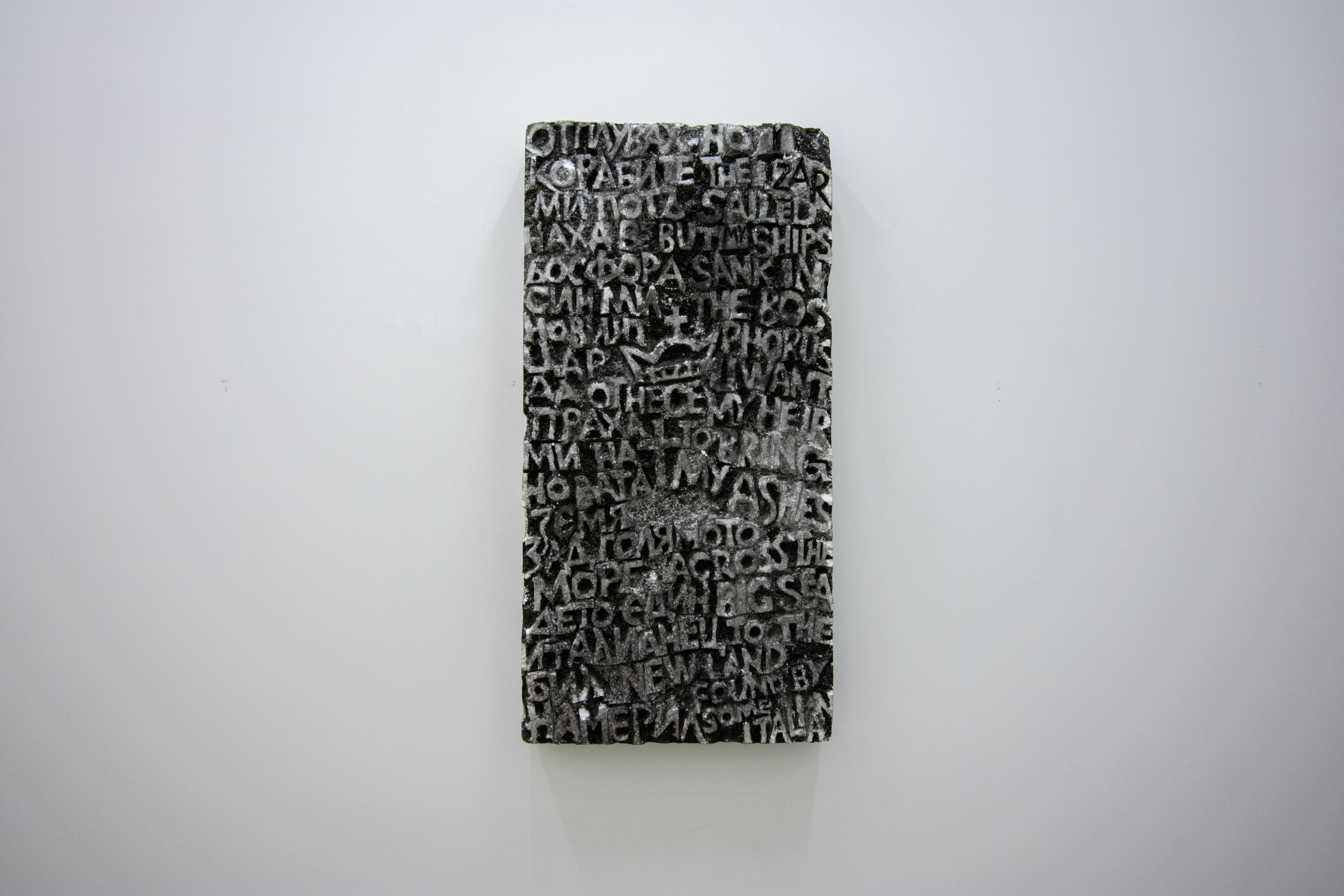 I, the Tzar sailed but my ships sank in the Bosphorus. I want my heir to bring my ashes across the big sea to the new land found by some Italian