WAYS OF CONSTRUCTING A WORLD 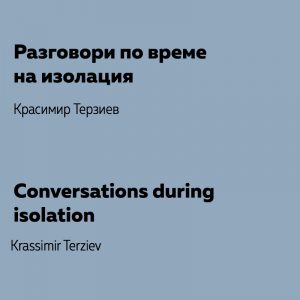 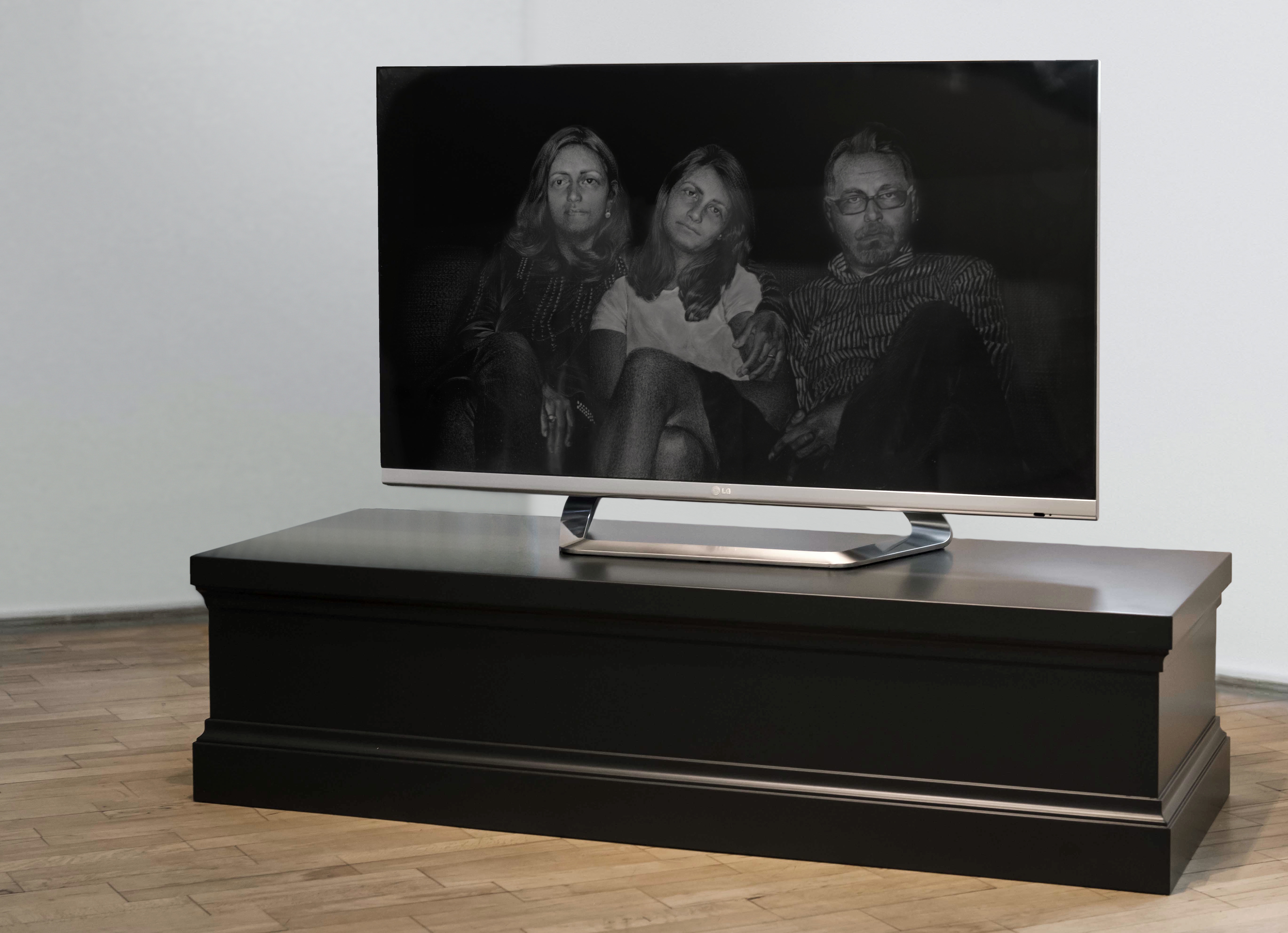 Maria Vassileva: A work of yours from 2019 is called Monument to the Time Elapsed. It addresses the fast pace of technologies, but also the huge changes in art. Taking in account the present dramatic situation with a global pandemic, can we conclude that the time of mankind is up? Did we miss our chances to build normality?

Krassimir Terziev: It is actually a series of works sharing a common title, in which I engrave directly on the screens of various nonfunctional devices – first myself as a user of my dead laptop, then myself again on my tablet and most recently my family, with whom I watch television on a defunct TV set. I did that following the current graveyard design fashion in the Orthodox Christian world for the black granite gravestones to be decorated with photorealistic portraits of the deceased. My preposterous gesture came from the realization of the great extent to which the personal electronic devices have become part of our biographies, the rhythm of our lives, of memory. When my first laptop died, I felt like it was taking along a part of me, of the specific everyday routine around which I had organized years of my life. After millions of ephemeral images had flickered on the screen throughout the functional life of every device, the only stable image that remains sustainable is the image of the user. When the extraordinary situation and the so-called social distancing started, even I was surprised at how real the work has become. Everything that remained from the cultural momentum was our staring into screens. The sole confirmation that we’re alive and not alone in the universe comes from there.

I don’t know whether the timeline of mankind has come to an end. What’s clearly expired now is the time of global neoliberalism, of thoughtless acceleration, inhuman efficiency and exploitation. So, the pandemic, like a spoke put in the hamster wheel, is actually our chance to change direction. The 2013 track of Arctic Monkeys Stop The World I Wanna Get Off With You was a beautiful metaphor up until a month before. Now, it is a reality devoid of a particular poetic value. But it is yet unclear what the direction will be. If human life finally starts to be seen as just a branching of life on the planet and life gains value beyond the economic calculations, we may be able to reach some kind of equilibrium, in which it would be bearable to live. If, however, we take a turn toward rigid control exercised by a union of the existing forms of governmentality and exploitation, then our time is up for real.

М.V.: In another work – Between Flashback and Déjà-vu from 2018, you observe the area using 4 static cameras and a drone-mounted one. The merging of the images invokes a sense of disorientation, an anticipation of something bad about to happen. Well, it’s happened now. But I’m curious what provoked you to create that work two years ago. What were you thinking then about the world we live in, to make you come up with this metaphor of impending collapse?

K.Т.: This is yet another series of video works (2016-2018) under a common title. In this case, it wasn’t my intention to alarm anyone. It is a demonstration of the current change of perspective in visual regimes – the one originating from the onset of cinematography in late 19 c. aided by a static eye-level camera, and the other using a drone-carried camera, which provides weightless, ghostly imagery unattainable for the naked eye, an approach slowly gaining strategic prevalence in the field of visual expression. In this demonstration I eliminated the human presence, in order to focus on the material conditions constructing the perception. The effect of a world without people is secondary, but of course, taken in itself, it problematizes the machine vision, which in the contemporary situation doesn’t need human intermediation any more. In the field of automated computer vision (let’s take the banal example of the surveillance cameras at crossroads and highways) images are generated by one set of machines only to be viewed and interpreted by another set of machines. These changes happen inconspicuously for years now, in a number of fields, but I thought a simple “homemade” experiment like the one I did would help us realize their effects, which expand far beyond their technical application. In 2017 I made a film with Daniel Kötter, which shows much more radically the urban landscape without human presence; its title is Ghost Descending a Staircase. There we documented the descent down the two staircases of a 31-storey high rise in Berlin. To do that, we used a camera, installed on every opening and closing door on every floor. And again, not a single human figure for the 27-minute duration of the film, which in terms of cinematic time, given the monotony of repetitive camera movement, translates into gargantuan duration.

However strange it may look from today’s perspective, I am not engrossed with the projections of a world without people just for the thrill of it. With the anxiety caused by climate change, overpopulation and the colossal dimensions of pollution, the moment of an imminent catastrophe has started to preoccupy many brilliant minds.  A bright example, which has had a great influence on me in this respect, is the book of Alan Weisman The World Without Us. In 2007 he provided scientific hypotheses about what megapolises would look like if their inhabitants suddenly abandoned them (years ago, when I read the book, the only thing I couldn’t imagine was why would that happen all of a sudden, but now I can imagine it). The descriptions of abundant plant and animal species and the almost tactile feelof the implosion of the concrete and metal man-made structures are mind blowing. This is a real possibility and it is hardly surprising that it has become the object of our imagination. Jules Verne imagined a voyage to the Moon a hundred years before it could actually happen. He even finded it important to clarify in the title that the voyage takes 97 hours and 20 minutes.

I recently read an analysis of the response to the pandemic in Europe, America and the rest of the world in the very beginning, when it all happened only in China. The conclusion was that all measures were critically belated on the premise of not creating panic. The author, however, argued that preliminary panic indeed would lead to effective and timely measures.

As for me, I hope my works don’t cause panic, but I try to imagine different alternatives to the irresponsible, wasteful, gamble-like world, which fed us with synthetic phantasmagoria just until month ago. Fear is the worst counselor and a deadly tool in policymaking, yet we must be ready to face our fears, because the society we live in is merciless, but then… so is nature.

М.V.: Almost all your works seem prophetic now. You titled your solo exhibition at Sofia’s National Gallery in 2015 Between the pastwhich is about to happenand the future which has already been. In a whole series of works you present the people in astronaut suits, like inhabitants of other planets, with the Earth just a tiny reflection on their helmets. On the other hand, you have many works directly linked with occurrences and events here on Earth, which you find unacceptable or bizarre, to say the least. Do you think the artist has an important role in society, that he or she carries responsibility?

K.Т.: All the works you mention are exercises in making different maps of the world based on my personal experience. The above title expresses my intuitions for a particular moment in time in this country, when medieval fortresses used to be built anew out of plastic, while the future seemed overridden with nostalgic cliches from the communist age. At that same moment, I really saw people strapped in the spacesuits of their own comfort. And I insist on the first person singular point of view; that’s why I engraved my own face on the laptop, and the faces of my family on the TV set screen. Otherwise, I risk to draw groundless conclusions and speculations. I apprehend my role as an artist in being able to learn to see the world taking into account all those things seen by the artists thousands of years before me, but not fearing to see the changes affecting my time, and unafraid to share this experience with the public. These ways of seeing(if I may quote John Berger) are not simply related to the optic nerve. They are ways of constructing a world. Of course, in a specific societal context, all this can be looked upon as just another sensory impulse in the economy of affect. 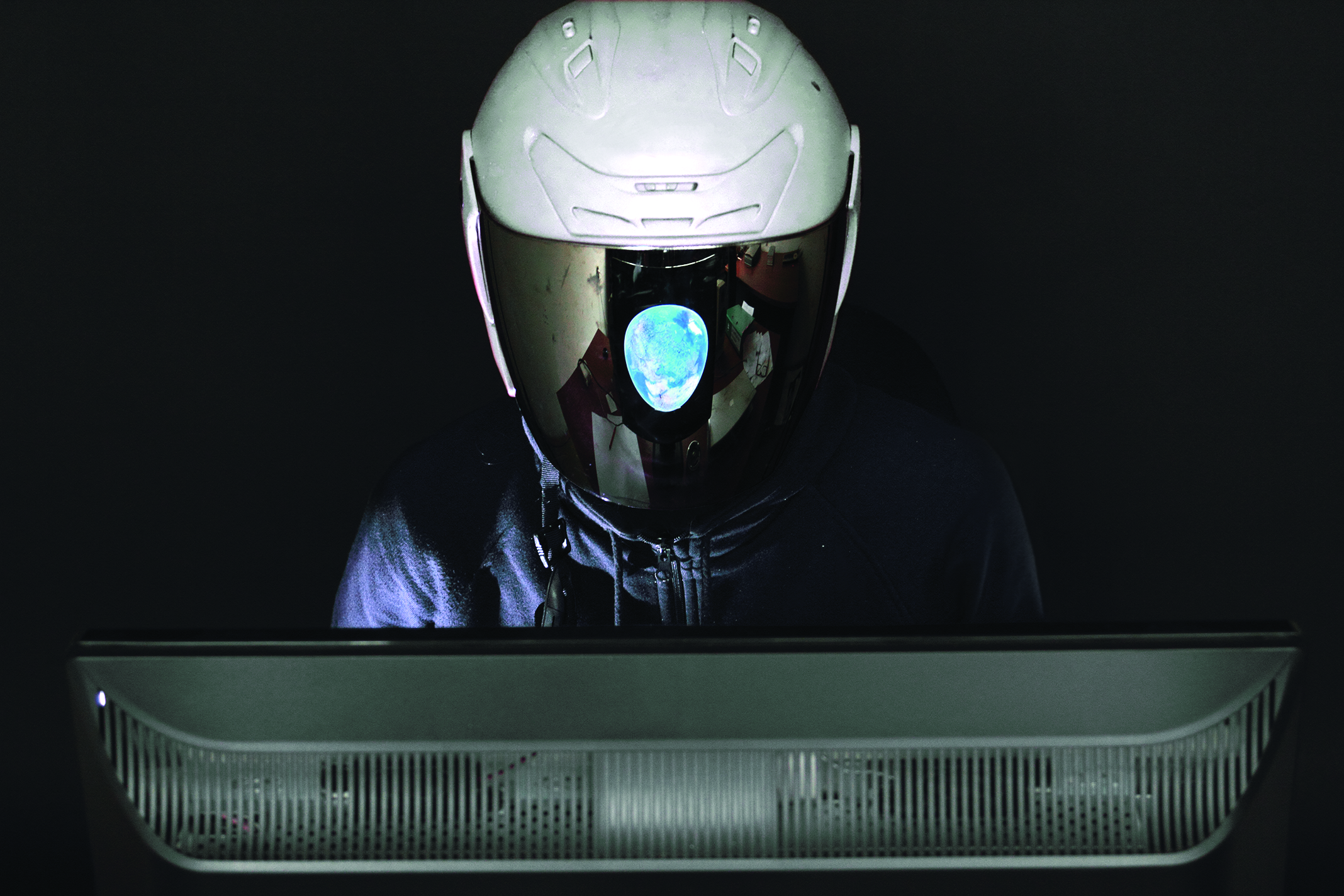 М.V.: You are among the few artists I know, who are so outspokenly obsessed with the future. Most of them are more interested in the present. As part of your 2019 show at the gallery Versus Art Project in Istanbul you exhibited an installation featuring the neon light caption Future Unforgettable.How shall we interpret this message? Do you suggest that the future will be so grey that there’ll be nothing to remember or rather that it will be unforgettably fabulous?

K.Т.: In the 1990s and early 2000s I took active interest in the present, when it was turbulent, shapeless and could have taken any direction. Projects like Library Paranoia, On the BG Track, Battles of Troyand many, many more were fixed on the present moment, in which Bulgarian culture was tuning in to the globalizing world in certain, often inadequate ways. After that, the present started to take more and more painfully rigid forms. My sociologist friends call the regimes east of the Berlin Wall „Stabilocracies“. Whereas, I started to take a growing interest in the visions of the future just because the existing alternatives had started to melt down long before the Arctic ice caps. Something like an outlook to the present from a hypothetical point in the future. In astronomy, they measure the distance to a particular star in a similar manner, using the parallax created by the viewpoint’s movement. 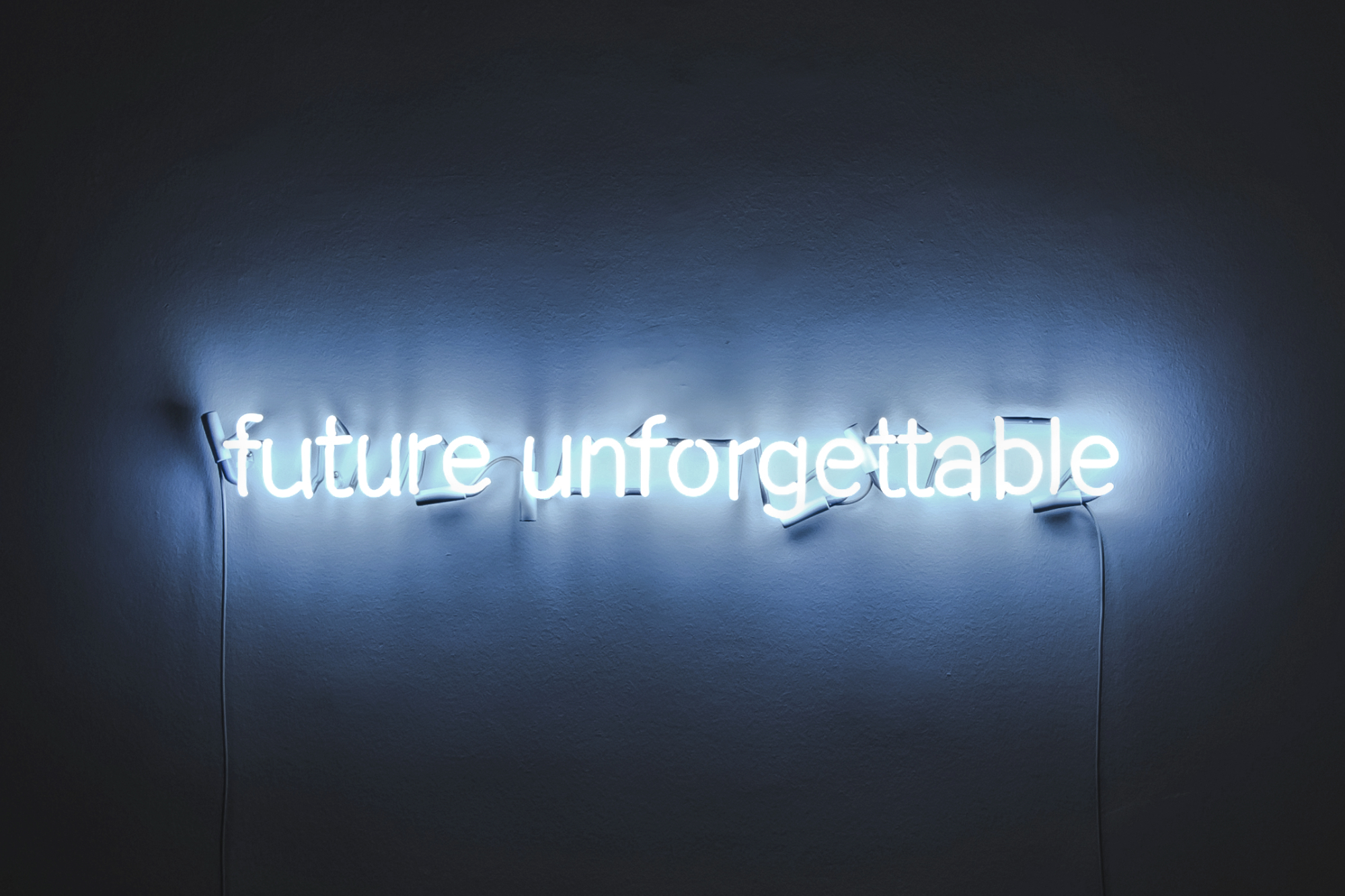 Shortly after the exhibition at Versus Art Project, I displayed a neon light installation at the two glass cubes of Sofia University’s Cultural Centre that take the opposite sides of the corridor of the main university building. One of the cubes glowed with the neon caption „The future which has already been“. The other displayed the inscription „The past which is about to happen“. And in-between, the public walked in one of the two directions fitting in naturally into the logic of the work. Like with other language-driven works, my approach has been to use short explosive statements of elliptic nature, which permit humour and multiple interpretations, both rational and emotional. I perceive these texts very much like images. Because the image, like a map of the world without a user key, has it in its nature to be wild, hard to tame, enabling new meanings with every sight. A state, unattainable for computer-generated codes and pragmatic real life calculations, and one which I value a great deal in my practice as an artist. In that sense, I would like to avoid my own interpretations, leaving this pleasure to the beholder. Artists have always been generous in that respect.

WAYS OF CONSTRUCTING A WORLD