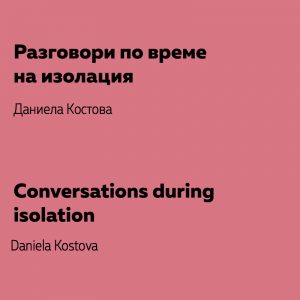 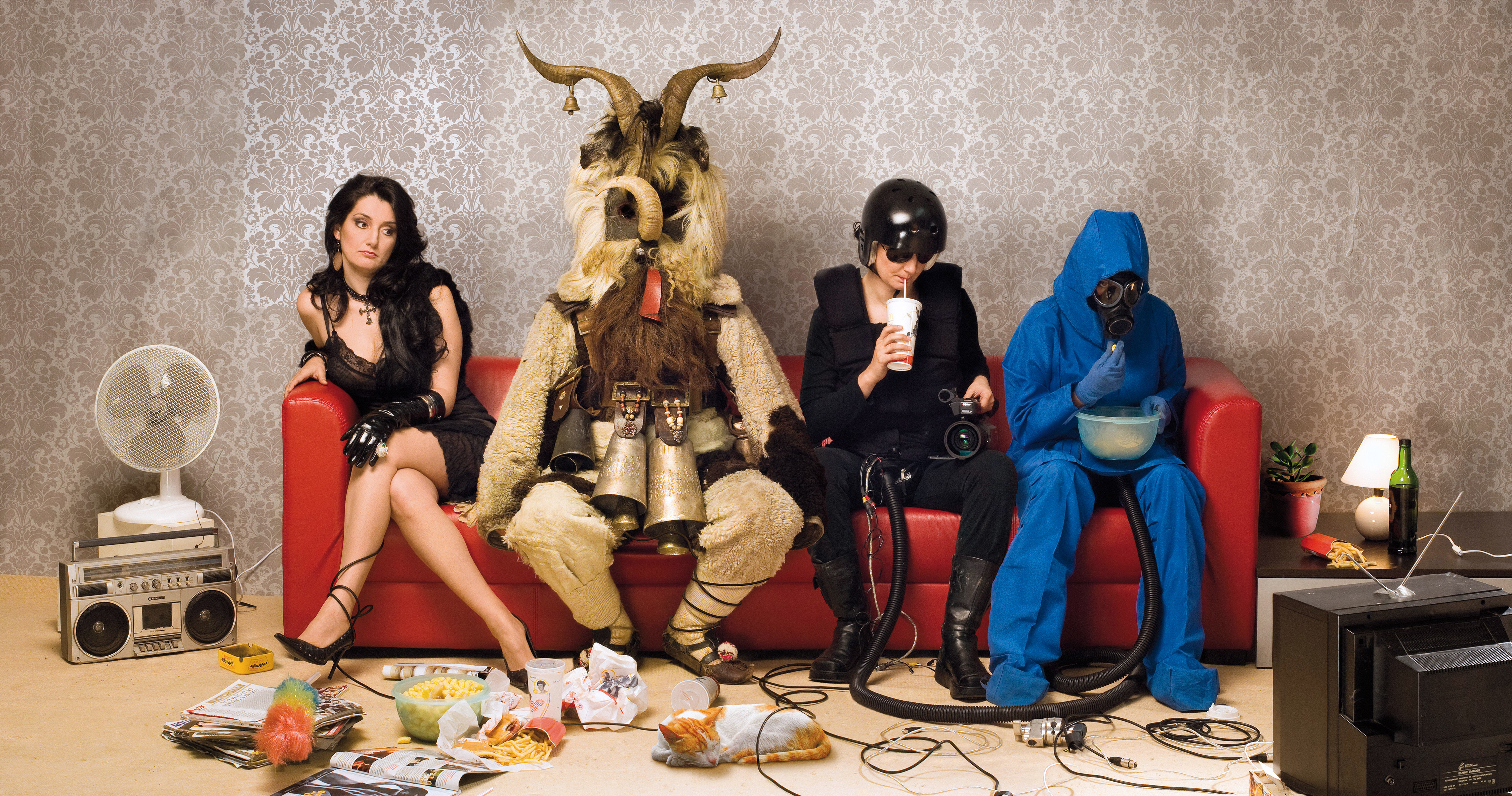 Maria Vassileva: You’re not one of those introvert artists. You have always been very open to different public activities. How do you see the artist’s role today and your role, in particular?

Daniela Kostova: Yes, that’s right. I work in dialogue with places, people and problems. I believe in an open process with changing parameters. That’s why my work takes long time, as ultimately, I have to give form to the interactions that took place, to synthesize them, instead of just documenting them. And the form must be adequate, a combination of both information and experience.

Currently, the issue of the artist’s role has been frequently discussed, especially in connection with the global situation. The concepts of society and community are changing so fast that it’s hard for us to react. Professional meetings turn into places for sharing anxieties and fears; the body becomes more important than the intellect. There’s this phrase, Life is in the way. I think it has always been like that, only now it’s more obvious. For me, the opening to life, to people, is crucial. I like to create situations (in the studio or on the street), which the participants enter with a predefined role, but have the freedom to navigate in their own way. I am interested in systems of interrelations and dependencies, big and small, and what would happen if we modify an element of such a system. I also use methods of play, improvisation and experiment, which allows for unpredictable combinations and solutions.

In my latest works I recreate seemingly domestic scenes, often based on found footage of disasters, calamities, floods, etc. The geography and cultural specifics are important here. My prints are so big that they try to surpass reality, to overlap and rearrange it. The domestic becomes public and vice versa; mundane situations transform into dramatic scenes. Right now, this monumental interpretation of daily life is exciting to me: suddenly our private space becomes more exposed, there is an element of surprise.

What’s the use of working in the isolated circle of contemporary art with its exclusive audience? What’s the difference between an artist who works witha given community and another one who works init? I’ve always been connected with the art community, but not exclusively. Since I have a child, I often communicate with families with children; also with immigrants in New York, some of them Bulgarians; and with people from entertainment, due to the specifics of our family business. These are quite different small circles, which overlap like the Olympic ringsJ. I like to focus on their areas of overlap, and explore these. I believe in different forms of collaboration and I seek them deliberately.

In collaboration with another New York artist, Tamas Veszi, I have developed a platform called ”Radiator Gallery,“ providing space for local and international artists and curators. Our approach is open and collaborative, and the exhibitions give us a reason to meet and reflect on pressing issues. Recently, a question emerged concerning Zoom meetings, which more and more mimic in-person meetings: whom to invite, which meetings should we join, ourselves? Should they be just for professionals or also include bus drivers, construction workers, cleaning ladies? Only for adults or children as well? Is that even possible, and who determines access? 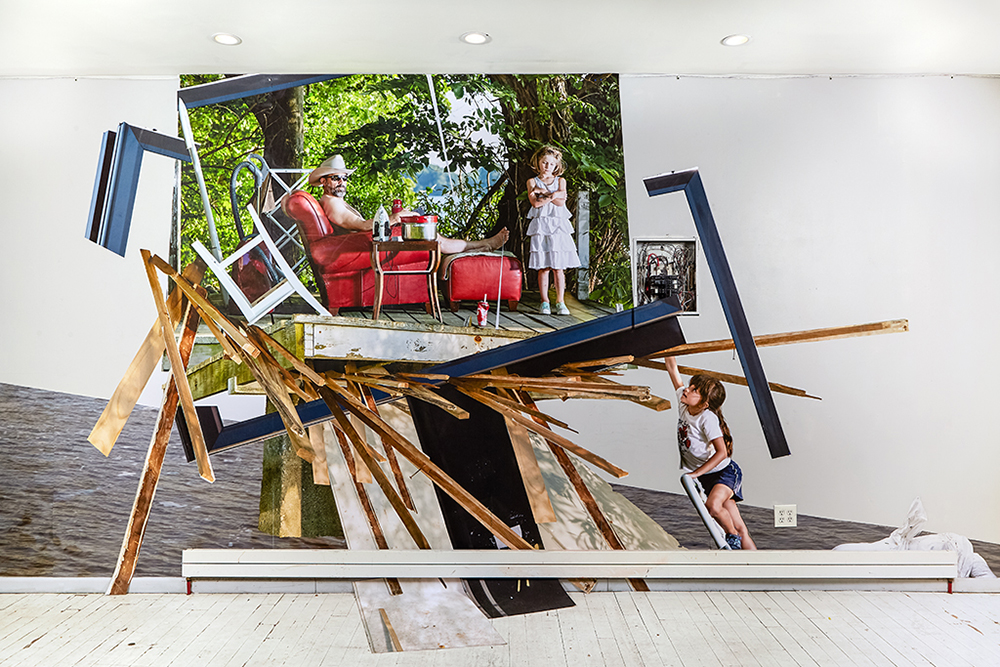 М.V.: Don’t you feel it’s a burden that contemporary artists have a limited audience? There is this big contradiction: the artists send messages that are all-inclusive, but these are only received by а small fraction of society.

D.K.: Yeah, I agree, it feels like a burden. I wonder all the time how we can open up the scene, engage more people. Some models already exist. For instance, Social Practiceis an established field, but of limited impact as it still lacks visibility; it’s often marginalized due to the nature of the practice itself. It’s interesting that a time of crisis invokes such a sense of urgency and quest for fundamentally new ideas, unorthodox thinking and bold propositions. The presence of art in social media is gaining popularity and it has the potential to decentralize the system, but good strategies are sorely needed.

There must be a way to transfer artistic messages to a wider audience! That, of course, greatly depends on the status of contemporary art in various societies and on the degree to which the system supports art financially, integrates it in the education and the public realm. My personal opinion is that the promotion of art should be a government’s priority, but in recent years in the US, especially under Trump, it’s not. There was a time after the Great Depression, when colossal funds had been invested in this field through the Works Progress Administration (and more particularly WPA’s Federal Art Project), which allowed art and artists to reach even the smallest communities in the country.

I chose to use figurative language and photography as my main tools, because people are used to them and understand them.Only, my subject matter is a bit different, somewhat displaced and often disorienting. At one point of my career I taught a course called “Redirecting Advertisement,” in which my students and I hacked popular ads and rearranged their elements to change their messages. In most cases I work with stereotypes (to allow for an entry point) but I try to take people out of their usual comfort zone. Recently I think a lot about the themes of my latest works, in which I recreated flood and disaster scenes using domestic objects at hand. Then, with COVID, everything turned upside down; the whole world realigned itself and submerged in this zone of discomfort, of broken rhythm and habits. In the transition from panic to “the new normal,” I ask myself: what is normal? It comes from the word “norm”. In this case, the new norms are turning into instruments of authority; they are adopted and reproduced to create a new order. And artists are the ones who must ask questions and try to understand, to critique; they must give this new culture an image. 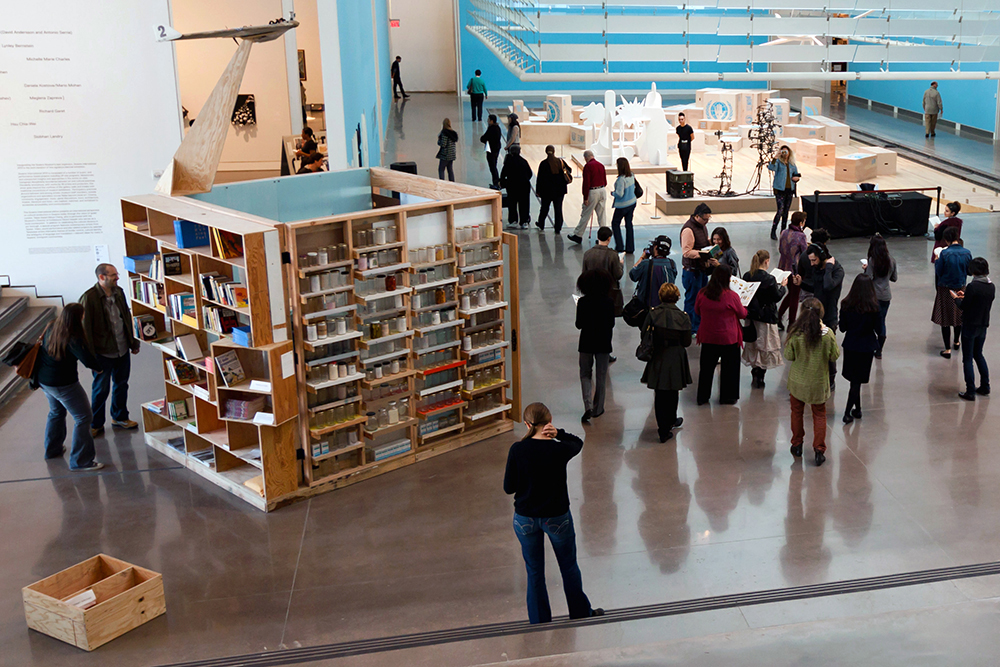 М.V.: Which was your most interesting socially-oriented project? Or social experience?

D.K.: The majority of my projects require some sort of interesting social experienceJ– whether I walk the streets dressed in an ”invisible“ costume with a hidden camera inside (Negotiations); or collect sweat from construction workers for making batteries (Waste to Work); or construct a dangerous playground at home using mud and old tires (Play Date, Loose).

Two of my projects have had greater exposure and public resonance in the last few years. The first was Smuggle Tactics (Flip-House),presented at Queens Museum of Art, New York, with 7 other collaborators from various disciplines (Meglena Zapreva, Milena Deleva, Vlada Tomova, Georgi Tushev and Nina Kancheva, Joro-Boro, Mario Mohan). The project also involved a series of events in cooperation with locals: family workshops, music events and even a pickle-making class.

It was a challenge to build a house in the museum itself, while establishing a relationship with the neighbourhood. Our intention was to involve various communities in creative dialogue; to translate the project into different languages literally and visually; to engage, discuss and unite, and create quality art in the process. The exhibition was part of the opening of a new wing of the museum and was visited by a large audience. It took huge amounts of energy to uphold the collaboration, and maintain interest during the whole exhibition run.

The other project is “Future Dreaming,” in Vienna, a large-scale public art work spanning some 4000 sq.m. To me, it was the most interesting social experience of contact with a wider audience. For the first time I felt the power of a positive message and of communication with people from all walks of life. For months I received greetings and thank-you letters from people I never met.

М.V.: You mentioned earlier that the impact of artists’ messages on society depends on how society treats art. Comparing Bulgaria and the US, what are the main differences, in your opinion? Which practices can we adopt and which ones we must avoid at all costs?

D.K: In Bulgaria, I grew up with the notion that art is a prestigious occupation and artists are intellectual elites with substantial influence on society: not always understood, but respected nonetheless for being different and having a vision for the future. There weren’t any artists in my family, but I was always encouraged, as my parents believed in talent. While I was studying I never asked myself how I was to make a living as an artist, even when in the Art Academy. Then the ’90s came along and the picture changed very quickly; we all tightened our belts. I remember a period when I had to work in restaurants and live with my parents. Then, like a life-saving injection, Soros arrived with his idea of The Open Society; now there was some money for contemporary art, for international travels. After Soros’ withdrawal, the oxygen supply stopped and the system collapsed. Soon after, I immigrated to the US, where I encountered a totally different value system and organization.

Art here doesn’t enjoy the reverence it’s given in Europe. The big museums and galleries, as well as the art fairs, are well attended but taken in proportion to the overall population these numbers are negligible. Museums rely on tourists and offer art as an attraction, part of the world of entertainment. I think that’s the big difference – the intersection between popular and high culture, which positions the art in quite a different way. And, of course, the involvement of private capital and advertising. On its absolute top level, art is a luxury.

The tough competition and the market, on the one hand, make the artists reproduce themselves; but on the other, there’s pressure on them to engage in crazy experiments and extremes in order to get noticed. This daring attitude seems only possible in either an extremely capitalist or an extremely socialized system. In New York, for example, people from all over the world come to try something new, to reinvent themselves. This endless influx of energy, people and money pump up the system to the point of bursting. It’s a balloon, which is popping now and showing the problems: the enormous class differences, the lack of infrastructure, of health care of social benefits, of protection for artists, who are precarious workers.  Everyone must save their own skin. I think this is something that the US and Bulgarian models have in common; they both could learn from the social democracies of Western Europe.

There are public commissions through the Department of Cultural Affairs (DCA), which help, to a degree for the integration of art into public spaces. Let’s not forget also the non-profits like NYFA and BAC, which invest in art, support the artists and give much needed visibility to the art. But the main problem lies in the funding, like in Bulgaria. Here, the funds for art are cut all the time and a large number of people compete for very limited resources. Almost all institutions operate on mixed funding, and the majority of them rely on private donations, which make up for almost 2/3 of the budgets.

The advantage is that there are affluent private foundations and people providing support, but the competition is relentless. The system lacks the stability of the one in Western Europe, for example. Most artists take loans to earn Masters’ degrees, and start teaching, which gives them security but distances them from the art market. It’s complicated. Whenever you say you’re an artist, people conclude that probably you don’t have enough money. And in a country where, unfortunately, money is the greatest value, that is quite sad.