The opening exhibition at the Structura Gallery engages in a worldwide conversation on the idea of play both as a critical concept and a medium of expression, considering playful environments and play objects as sites imbued with contradictory expectations and conceived for and with human bodies in mind. We typically associate play with freedom and creative expression but it often entails social norms deeply embedded in institutional structures. By creating and representing various playful environments, contemporary artists in the exhibition aim to challenge the lack of transparency of such norms that condition behaviors and body movements in public spaces.

In its multi-faceted and multi-layered aspects, the concept of play has a well-known presence in the Western history of modern and contemporary art. Capturing its subversive potential, Dadaists and Surrealists in the early 20th century, as well as Fluxus artists in the post-war period, have engaged with the concept of play as an artistic medium to challenge established art institutional boundaries by democratizing art making, using found materials and involving the participation of the audience.

More recent examples include Maurizio Cattelan’s Stadium (1991) that consisted in an oversized football table to accommodate eleven players per team, Tino Sehgal’s This Success, This Failure (2004) that transformed the Institute of Contemporary Arts (ICA) in London into a playground for children from nearby inner-city schools, and Carsten Höller’s Test Site (2006) installed in the Turbine Hall at the Tate Modern in London encompassing three large spiral slides that invited both adults and children to play.

Rather than offering a site for interactive and participatory encounters, the exhibition at Structura Gallery considers play, play objects and playful environments in public and institutional spaces as potent subversive sites. As such, it aims to problematize normative expectations of play by inviting artists to consider denying public access to their works.

The seven international artists in the exhibition reflect on the subversive potential of play in order to expose and confront various controlling mechanisms that manage human bodies in public space. Chloe Irla’s multimedia installation becomes a metaphor for regulatory technologies of power, interrogating the relationship between game and play in public and institutional spaces. David Page’s carefully crafted three dimensional objects challenge expectations of regulated play in general and standardized toys in particular, which inhibit creative exploration, an important developmental process in children’s lives. Daniela Kostova’s multimedia installation questions the wider implications of the impact of safety requirements on what constitutes safe and creative play in different social and cultural contexts. Luana Perilli’s video work highlights play as a critical strategy to reclaim and subvert an abandoned site and its traumatic memory. Rachel Peachey and Paul Mosig’s work reflects a global interest in adventure playgrounds and gives visual form to risk as both concept and activity that is necessary for subverting controlling technologies of power through play. Songül Boyraz’s photographic series record the improvised playgrounds and living conditions of Syrian refugees in Turkey. 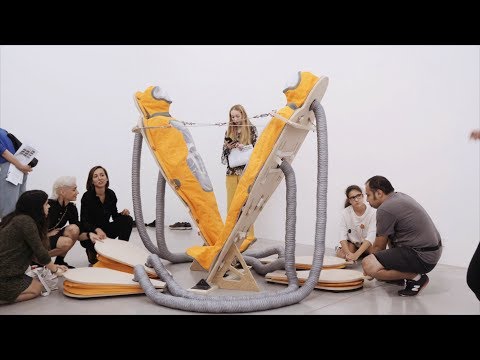