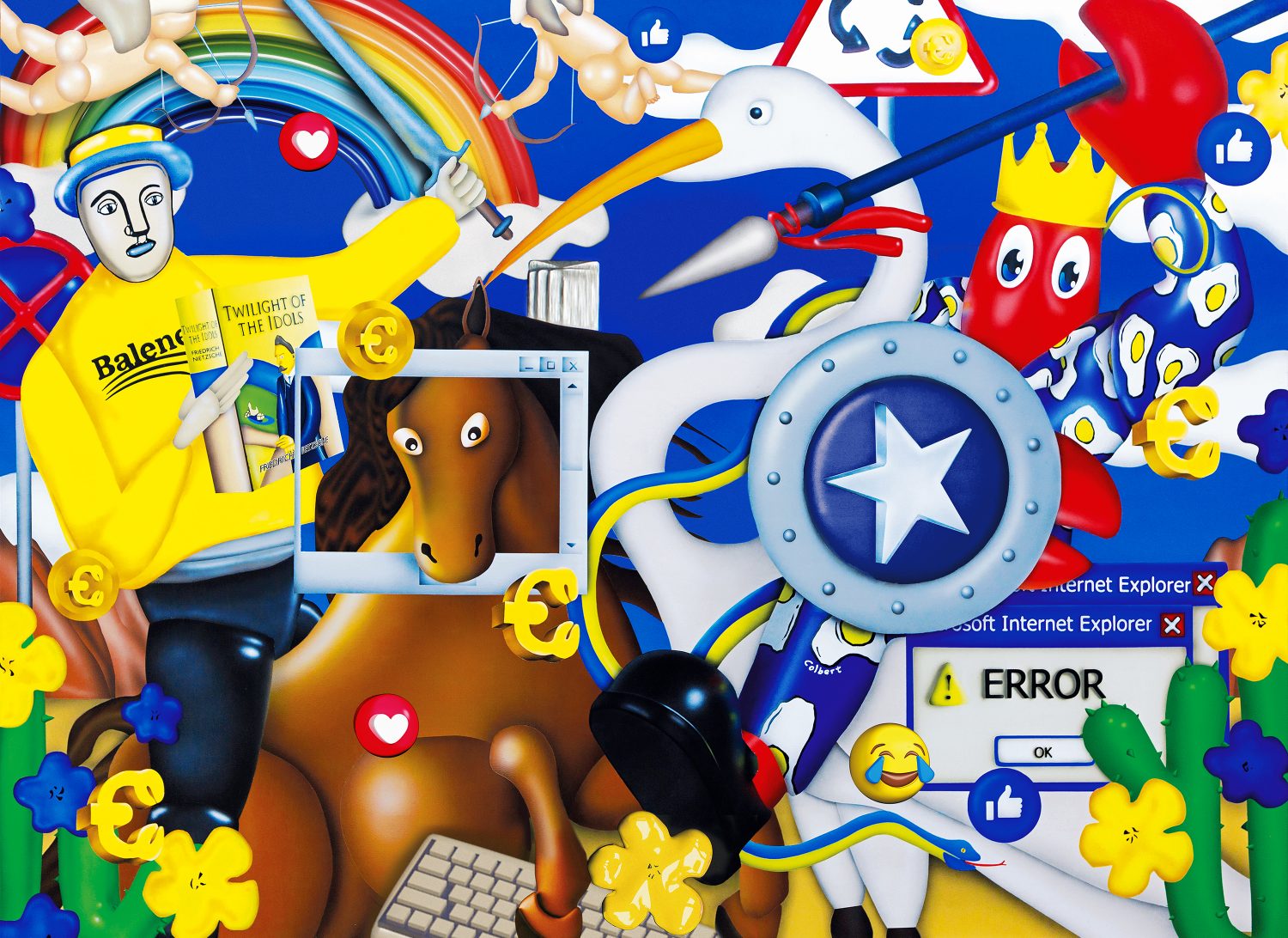 Philip Colbert (b. 1979 in Perth, Scotland, presently based in London) is known for his multidisciplinary approach, which enables him to create an immersive art experience. He works across the mediums of painting, sculpture, fashion and design. Often called „Andy Warhol’s godson“, Colbert develops the tradition of pop art and creates modern narrative paintings paying tribute to artists such as Richard Hamilton, James Rosenquist and Roy Lichtenstein but transposing their themes and methods to the digital age.

In his opinion the contemporary artist should be a person active in multiple fields. At different stages of his career Philip Colbert started the iconic brand, The Rodnik Band, influenced by the post pop art movement. As a part of that movement, he designed pieces of furniture and on one occasion even vinyl wrapped a BMW 7 with his trademark fried egg print.

He defines himself as „neo pop surrealist “, a term which highlights both the hybrid nature of his art and his memorable personality abounding in humorous whims. One of his favourite characters is the huge lobster, which came to be seen as his alter ego. Philip Colbert does not just create works. He is a work of art himself, always showing up in one of his self-designed colourful outfits.

His entire work is a juncture between various historic references and modern analogies. The production of paintings, sculptures, clothing and furniture is inextricably linked with the world we live in, where mass production is the rule and a trademark is the ultimate weapon. Colbert’s collaboration with top acts of the music scene and fashion icons only reaffirms the artist’s notion about the openness of the world and art at large, as well as the indisputable and overwhelming influence of mass media and social networks, on our collective perception. Colbert’s painting references from the past intertwine with landmark signs of modernity. His extremely colourful and bright pictures express the artist’s desire to emphasize our constant thirst for information and to push the boundaries of painting as far as possible.

The works of Philip Colbert often comment on some of the darker aspects of life too, in particular the consumerist culture. The combination of light and darkness is a key element of his latest projects. Thus, his art becomes a black mirror of reality.

Philip Colbert’s first exhibition in Bulgaria is realised  with the partnership of VIVACOM. The company has long-standing traditions in support of art and culture. As part of its strategy to make international art accessible to Bulgarian public, VIVACOM supports the photographic exhibitions of  Lenny Kravitz, Brian Adams, Steve McCurry and others. This year, the company continues to invest in major cultural projects.