Touch only with eyes 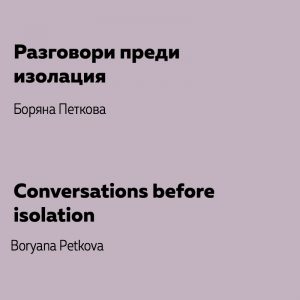 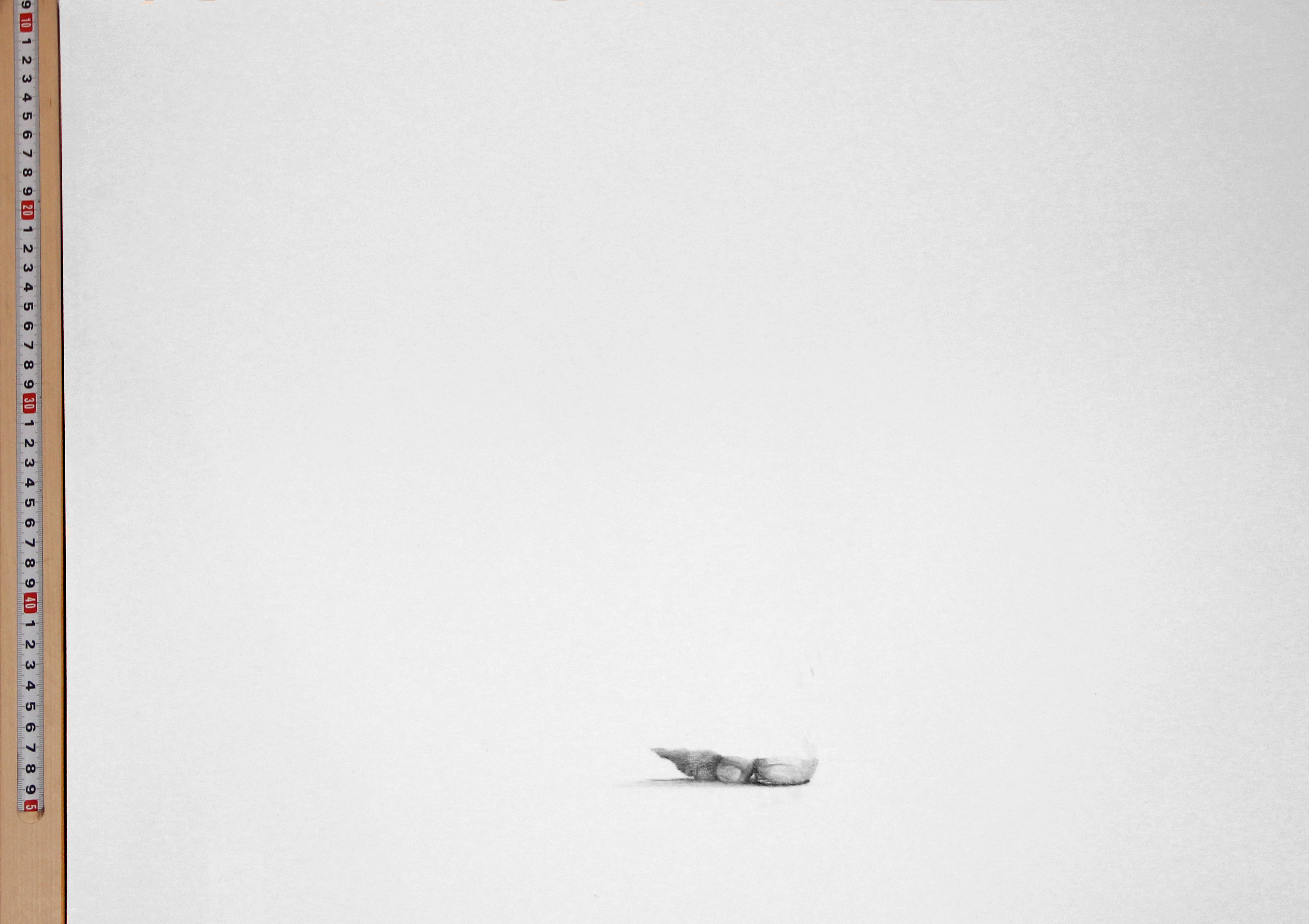 Maria Xypolopoulou: An essential part of your work is focused on the examination of vertical and horizontal axes (Reach out? (Trying to Touch the Sky), 2019– ; There Is Someone, 2019-). How did you start to explore the limits of the body and where’s the source of your desire to overcome the contours of human nature and surpass yourself or, in other words, to go beyond the boundaries of your own body (Jump Drawing, 2018; Corlinea, 2018)?

Boryana Petkova: The crossing of borders, the exceeding of the possible (not just overrunning the physical limitations, but the attempt to overcome all types of boundaries imposed by ourselves or the external world), is an idea, which governs my work.

When drawing, I use my own body as a measure unit – its height, velocity of movement, durability. It is both a reason and an obstacle.

This transcendence, going out of, beyond, over, is provoked by our confrontation with the impossible.

Verticality in itself implies simultaneous movement from the bottom to the top and vice versa.

Reach out? (Trying to Touch the Sky) is a series of drawings, which depict only the tips of outstretched fingers reaching to something that’s slipping out. Next to each drawing is a tape measure marking the limit, which in this case is my height with my arms outstretched. And the drawing itself starts where the tape measure ends. The installation of drawings at this height makes them barely noticeable.

There Is Someone is a series of „portraits“ of the tops of heads. The painted part of the head is the one, which is visible when the person stands on his or her toes.

I started to draw these fingertips and tops of heads in a period, when I could hardly afford the luxury of working as an artist.

M.Х.: Can we assume that this aspiration to „rise up unto your toes“ and  „outdo yourself“ is, among other things, an invitation to rethink and revise the socio-political borders that surround us?

B.P.: All types of borders – social, cultural, natural, must be constantly rethought and reconfigured. Or, at least, examined and analysed. This is one of the conditions of advancement. 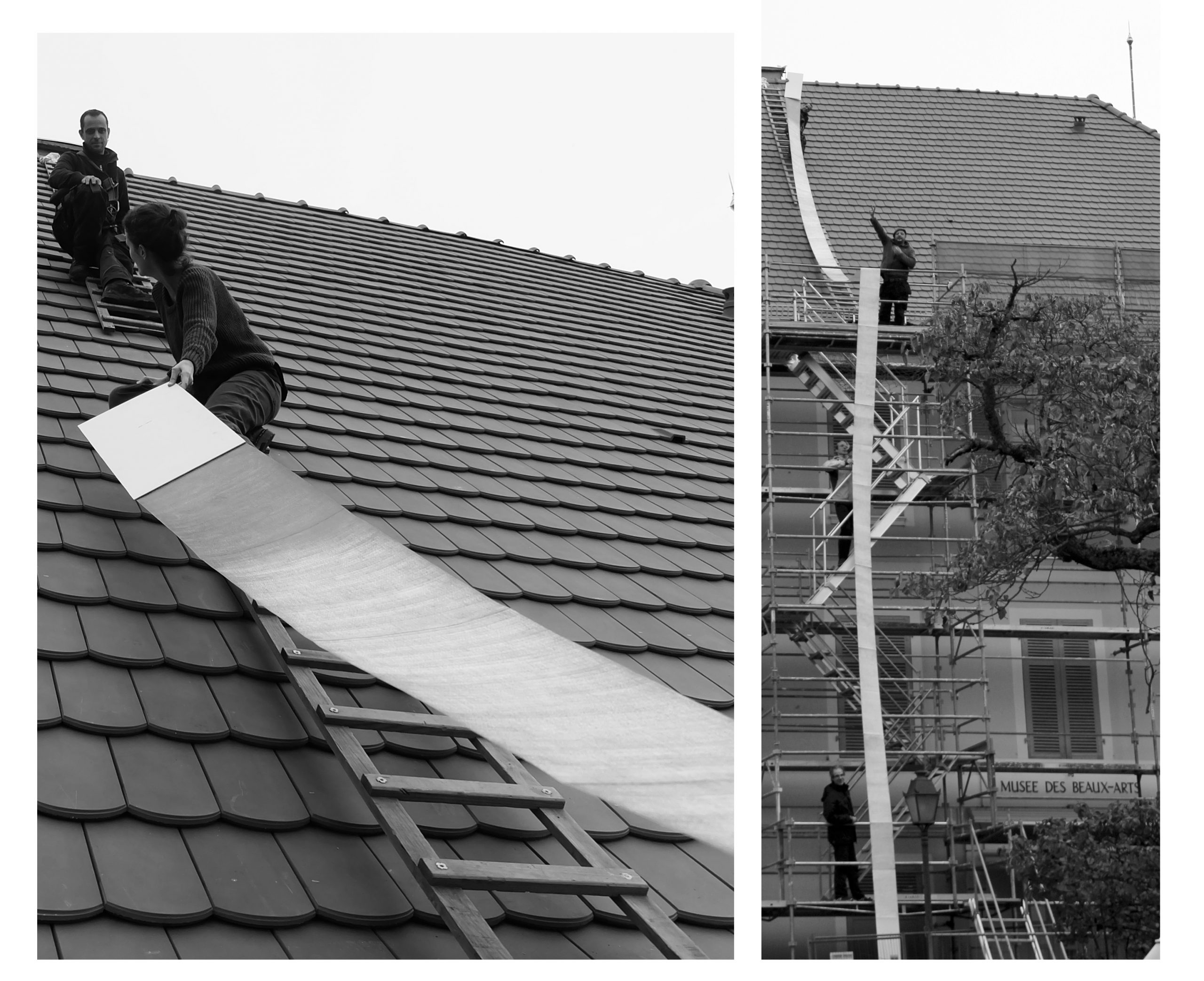 М.Х.: Your observations also take as a reference point the landscape and the architectural environment (INFTY,2019, Echoes, 2016).

B.P.: I work directly with the respective space, which I see as a kind of boundary as well.

INFTY is a project created for the show Mutuus at the Fine Arts Museum in Mulhouse. It is an intervention on the museum’s building itself – on the inside and from the outside. My wish was to modify its highest point in an inconspicuous but real way. To elevate its height. I put a 1 cm high object on the museum’s chimney (its highest point), which replicates its shape and superstructures it. That object will remain attached to the museum’s roof. Then I literally joined the base and the roof of the museum with a long band of sunlight reflecting material. This unusual sculpture is not constantly visible. That depends on the intensity of sunlight. In certain hours of the day a narrow shining line occurs and extends the actual height of the museum.

Another element of this project is a drawing with the same length as the new „ephemeral“ height of the museum. When unfolded, its size is 0.3 х 20.01 m. (It was fully unfolded just once, when I managed to climb to the highest point of the museum).

In this project, the execution was very important to me, the actual process of placement of the object. The project was approved, but not in the way it was supposed to happen. However, I executed it the way I imagined it with the help of three workers, who renovated the museum’s roof at the time – they became accomplices to the idea. Together, we unfurled the drawing. With their help I climbed up to the chimney. Also, they were the people that documented the intervention for the most part. 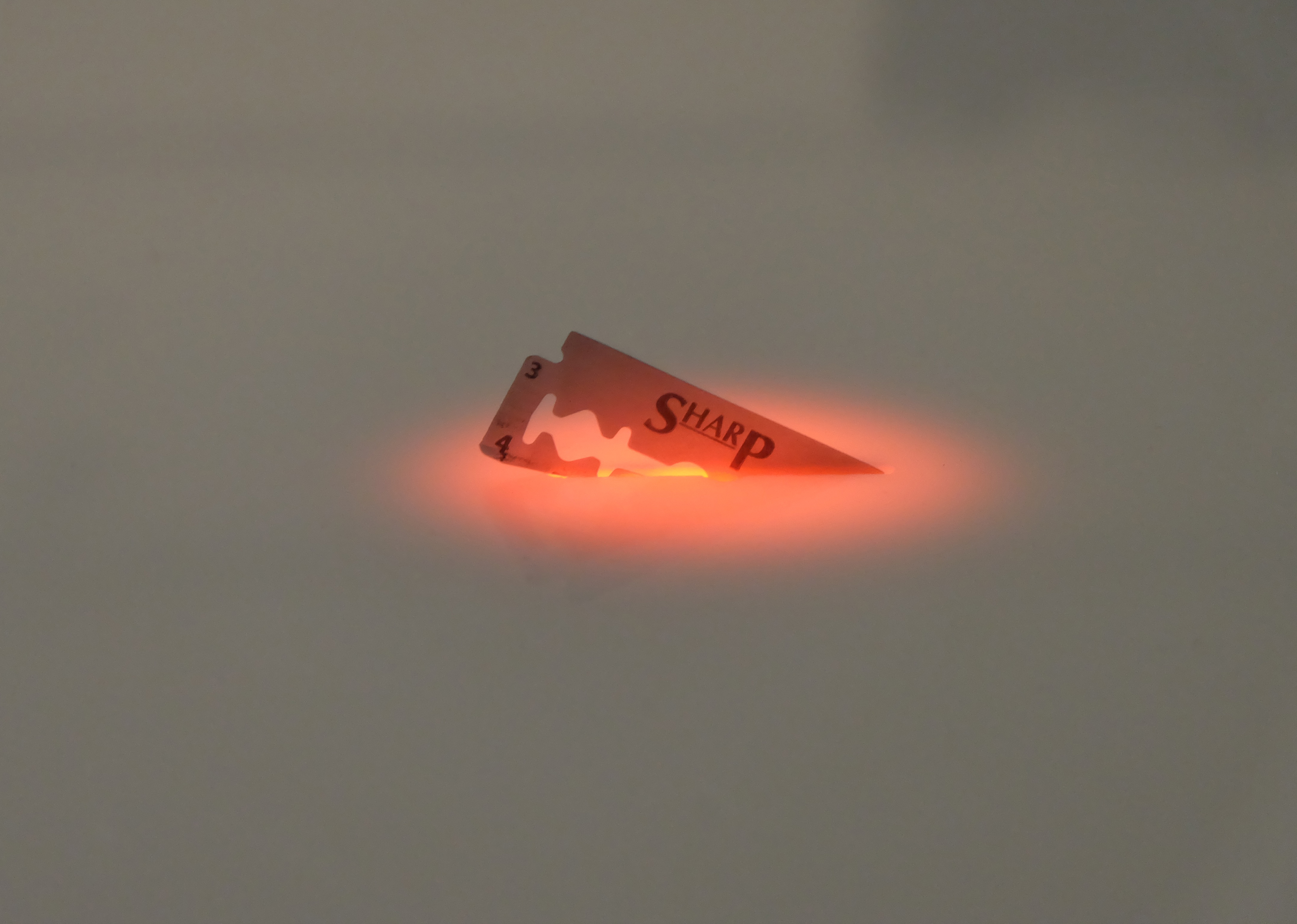 М.X.: Your work is characterized by the use of fragile primary materials: porcelain, graphite and glass. However, this fragility is often in contrast with visual brutality, like the bleeding porcelain surface cut with a razor blade (Invivo,2019).

B.P.: I use materials that in principle bear the risk of breaking, but also of injury. They correspond with the instability and mostly with the fragility of man, which is strongly reflected in my work.

The porcelain mechanical „wounds“ in Invivo  are only and solely activated by the viewer’s physical presence. Here this danger, the risk, can be controlled. People, who in most cases are tempted to touch the porcelain at an exhibition (but that’s forbidden in almost all cases; porcelain items are protected, separated from the viewer because of their fragility), have this opportunity here, but the razor blade placed in the middle of the plate, automatically eliminates that desire to touch.

There are states of the body and spirit, which are timeless, like pain, fear, love, sorrow, hope. Though often classified as banal, they are part of us and will be continue to be part of us in the future. No matter how much we robotize and anesthetize ourselves, no matter how people will look tomorrow, these states remain unchanged. And they will always be contemporary.

M.X.: In other projects of yours (Talking, 2017, Corlinea, 2019) the porcelain functions like a surface for „recording“ different types of writing. You’ve chosen to leave your trace on this fragile media.

B.P.: As regard the material itself – porcelain has features specific of living matter as well. It changes, breaths. It is hot. Or very cold. It not only absorbs information, it literally interacts with it.

М.X.: Your minimalistic drawings demand an attentive audience. While most of your works require from the viewer to peer up or down, the project Guardian (2019) offers a different scale: the drawing exceeds human dimensions, it even „envelops“ the visitor.

B.P.: The drawing does not exceed them, actually; it rather outlines them. Those were two circles with diameter equal to my height.

Many of my projects are on the border with performative drawing, but ultimately there’s no performance. All remains documented and engraved in the gesture, and the presence is actually a highlighted absence.

I started Guardian in 2017 during a ССЕ residence at CIAV Meisenthal, where I made the glass sculpture. For two years I looked for the right space for this project. Finally, in 2019 it was completed for the show FINALE in Structura Gallery, Sofia.

One of the circles was made to match the horizontal, lying position of the body, and the other – an upright vertical position. The two circles (just like the two notions of up and down) intertwine, overlap to finally form a whole entity, an inseparable drawing in the gallery space.

The absent body is accentuated by the glass sculpture imitating a tree guard divided into two separate symmetrical parts. In French this type of guard is called corset d’arbre or a tree corset. The size of the sculpture was also adapted to my body. It’s like an invisible prosthesis that protects both with its power and its fragility. 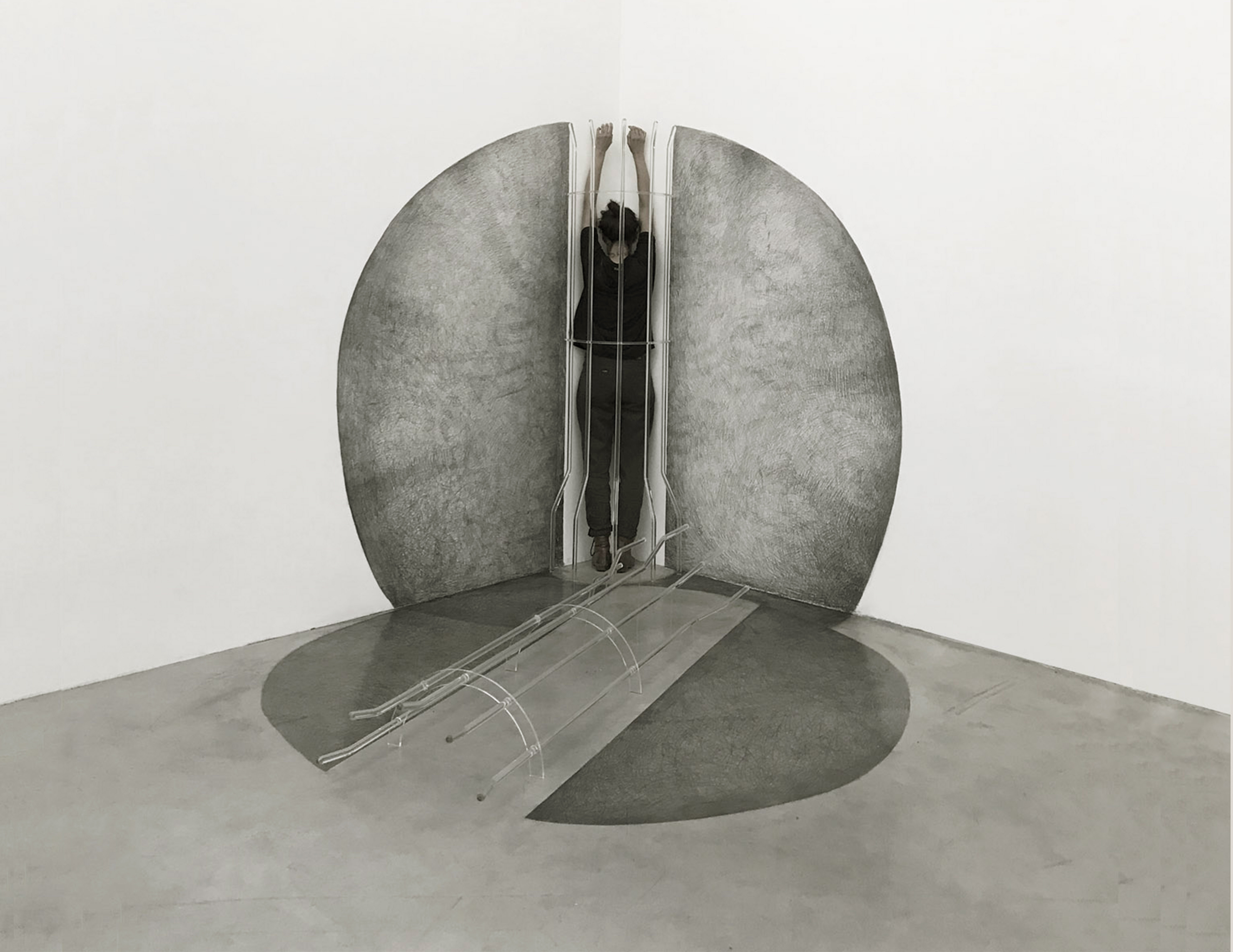 B.P.: So far, I have used the sound as a type of drawing. When hearing something, the viewer also sees clearer. But in that particular moment I am very interested in the function and combination of all human senses, sight and hearing included, of course. The senses for distance are the most commonly used, but there’s entirely different approach to works of art that require close contact, which engages the senses of touch, smell and taste.

I use human properties like body temperature, pulse, blinking. I try to extract these and combine them with the inanimate, the automation, the mechanical.

М.X.: The inborn solitary nature of the artists and the way they spend countless hours all by themselves may be the object of an endless discussion. But in your artistic endeavours you often prefer to communicate with other artists (Talking, 2017, Link, 2019, 2 Hands Drawing, 2017/2019)

B.P.: Through my work I try to connect different spaces, people and ideas. I try to find and imagine all possible, sometimes absurd ways to link opposing elements. To create a kind of symbiosis between forces that push away from each other. To do that, I often bring myself to meet the other. This is a precondition for surprise, a clash of different energies. A face-to-face meeting is supposed to make us more open to that other and, most of all, step out of our comfort zone. I don’t work only with artists. I work with people, persons, who inspire and stimulate me in some way. These can be friends, curators, philosophers, musicians, workers, my dentist, relatives or my own children. 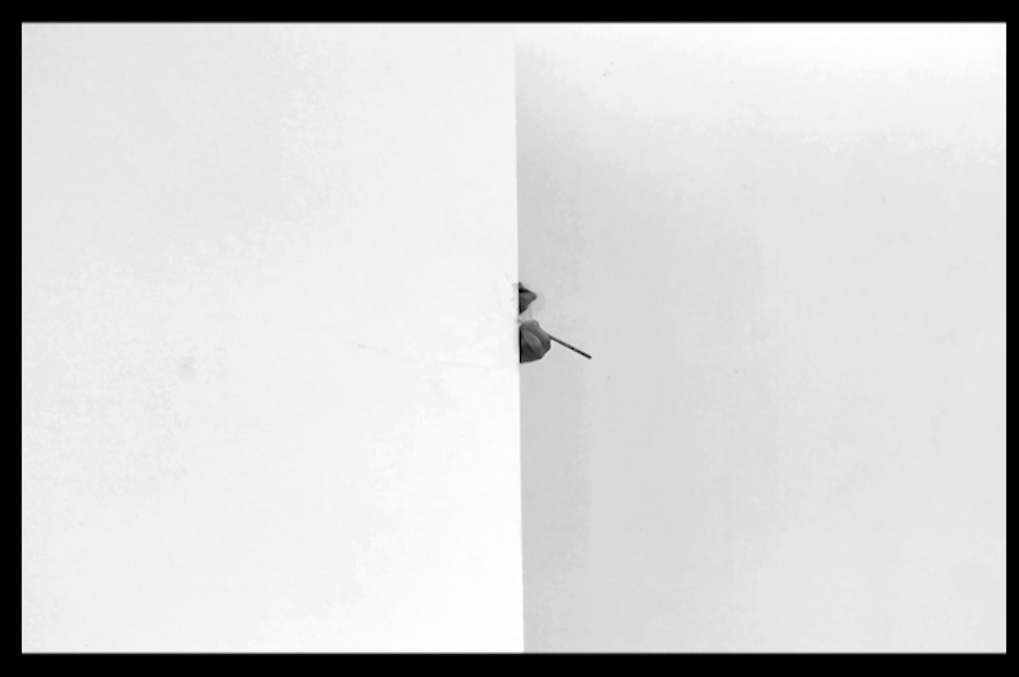 М.X.: The titles of your projects attract the viewer’s curiosity. Touch Only With Eyes, 2019-, also demonstrates your interest in studying the human senses. In these works, the manner of seeing becomes fundamental.

B.P.: Ne touche que avec les yeux is something we say to children again and again to prevent them from touching, most when they are in museums and galleries. It’s a poetic, but strict prohibition.

I chose this expression to be the title of a series of pieces I presently work on because sometimes we are unable to open our eyes and actually see. As if something must really be right in our faces to notice it.

Displaying these works in an exhibition context also provokes us to ponder on the stance each visitor must/may/would like to take at such places designed to serve as „temples of art“ (museums, galleries, art centres), where the works of art are still revered as icons.

М.X.: Drawing has often been associated with the production of images. According to Laurent Gervereau the image is connected with the imaginary, therefore with the fleeting and the inessential. But your minimalistic manner of expression rather provides the space the viewer needs in order to „withstand the frantic competition of the million images, which surround him/her every day“ (in the words of Maria Vassileva), thus making the viewer stop for a while.

B.P.: Yes, maybe most of my projects are a kind of „gymnastics“ for the eyes. I urge the eyes to seek instead of just seeing everything at once and without any effort.

М.X.: Drawing is the core of your artistic practice. What is the drawing to you?

The conversation originally appeared in February 2020 in the online magazine of the independent art platform Space 52, Athens. For the website of Structura Gallery, it has been expanded in May of the same year.

Touch only with eyes