M.V.: You grew up in a city, but for several years now you’ve been living in the countryside. This hasn’t been a personal choice, it rather happened due to circumstantial factors. How did that situation change you? How do you look on life from the distance of your current position?

D.S.: My wife, our two children, my mother-in-law and I live in a village called Voneshta Voda. We’ve been in this situation since 2015, when my father-in-law died in a car accident. In the beginning, it was very hard for all of us for a number of reasons. I felt anger and rage. Then I realized that these emotions poison me from the inside, and this toxicity affects the others around me. I accepted that I cannot change the facts and must look on the bright side of things as much as possible. I’ve always loved and sought nature, am not what is called an “urban person”. That’s why I had no problem with distancing from the big city (as far as Sofia can be called so). Now I have less time for drifting around due to the specifics of country life and the raising of my children. I had certain worries that this may block my creative process, that I wouldn’t have any ideas for projects on account of the banalities of everyday life. Of course, it’s not so and this new environment combined with the immediate closeness to nature provoked a certain shift in the focus of my work, which had a strong revitalizing and inspirational effect on me. I often travel to Sofia trying to schedule my trips so that I can also visit the opening night of an exhibition. In this way I can meet and talk more often with colleagues, which is more complicated when you live in the country. Of course, Tarnovo (the nearest town) also has an active artistic community, and even a gallery of contemporary art, which was opened last year. 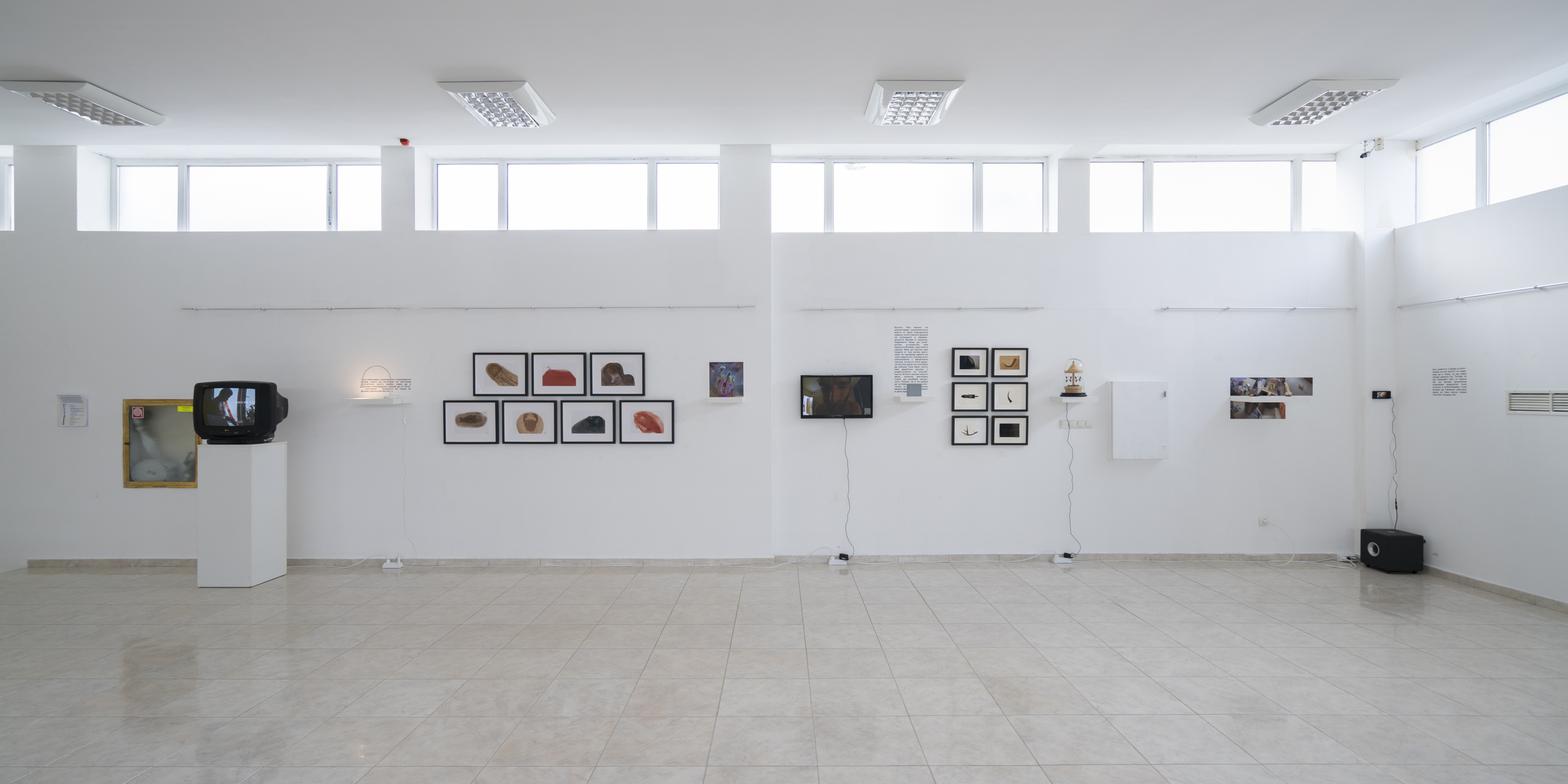 M.V.: You’ve studied photography and the first show, which put you on the artistic map, was in Vaska Emanouilova Gallery back in 2010. It was called Youth and it documented the life of urban youths and all the dramatic circumstances that come with it – drugs, alcohol, sex and death. But in present time, what would you point your camera at?

D.S.: I’ve always taken pictures of the things that surround me. Up until ten years ago I had many friends and acquaintances, with whom I used to go out all the time; therefore, I took their photographs on a regular basis. Gradually, the number of those friends decreased so much that I can count them on the fingers of one hand. Since then I haven’t stopped taking pictures, and I keep photographing the things that are directly in front of me or around me. So, little by little, the objects on the pictures and the focus of my life shifted from young people and their everyday – mostly decadent – pastimes, through intimate sexually charged photography, to innocent pictures of small children getting to know the world. One thing that has always been present in my pictures is nature, from the very first films I shot almost 25 years ago, to this day. 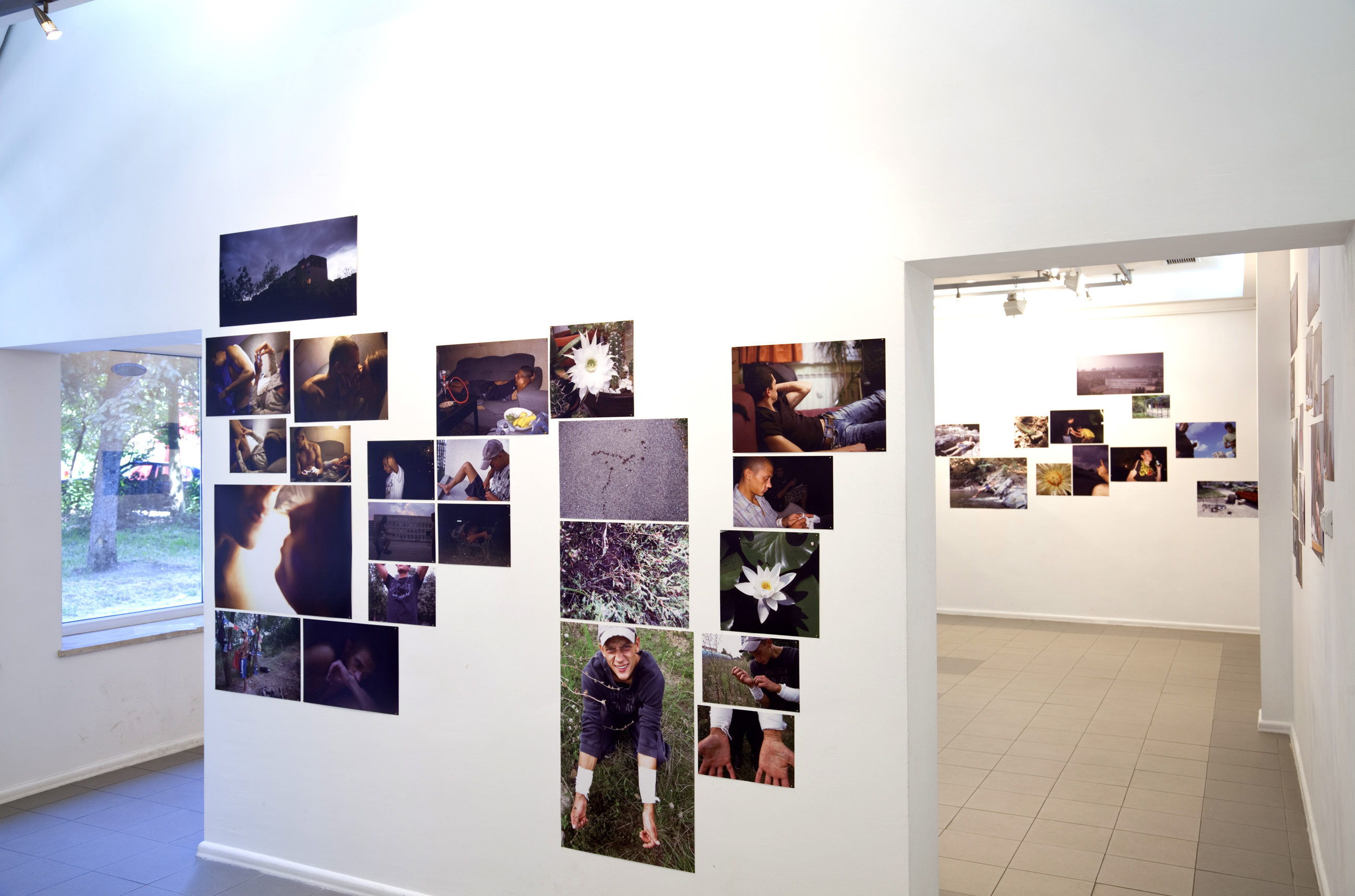 M.V.: Can you give us a brief outline of the road you’ve walked in the last 10 years? One of your early projects showed yourself self-educating in history of art. In fact, what was it that provoked you to become an artist?

D.S.: This has been a road of self-exploration and perfection of the used media. I am not an art academy graduate so I lack some basic knowledge and skills. That allowed me to implement the project The Story of Art – A Concise Version, which wouldn’t make any sense if I’ve had such training. Most of my works are based on some personal experience or a topic I feel strongly about. I cannot give a verbal expression of what’s in my head. Usually, when a topic is exciting or interesting for me, it captivates me to the point of obsession and I need to process the information in some, most often visual, form. In this process, I inevitably leave a piece of me in the work. Currently, I am very preoccupied with climate change. In fact, this has interested and upset me for quite some time. I’m not optimistic about the future of mankind. I think that our lack of action will put a very heavy burden on the generations that follow. Most of my projects in recent years gravitate around these concerns and thoughts of mine. 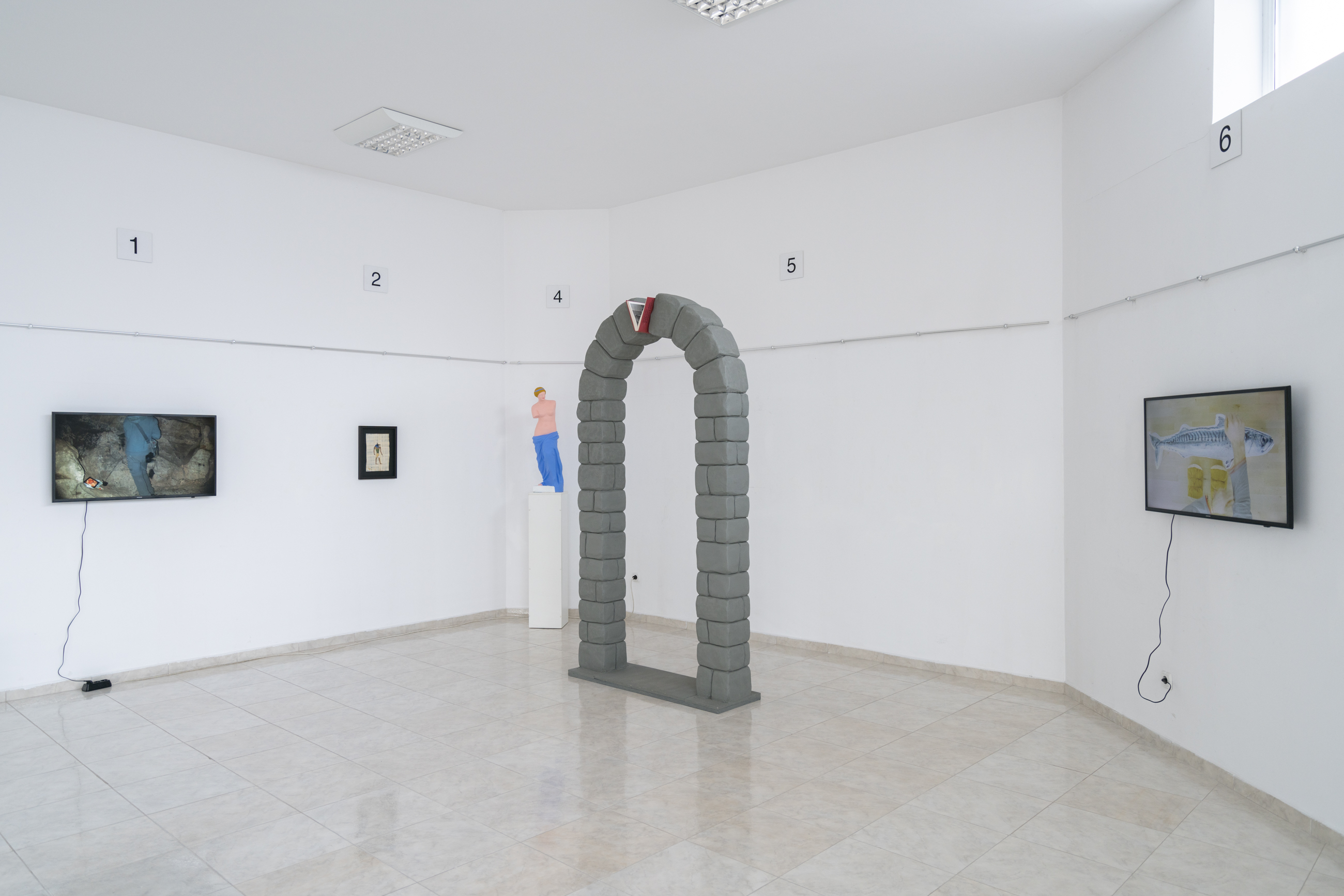 M.V.: You’re talking about your most recent project Signs, which was presented at Heerz Tooya Gallery in Veliko Tarnovo. Indeed, the two installations touched upon the issue of climate change on a global scale. In an earlier work from 2017, Getting Back In Shape, you share your scepticism concerning the reduction of harmful emissions. There are not many examples in contemporary Bulgarian art of such an active stance to problems affecting humanity at large. Do you believe that artists have a higher role in society apart from entertaining us, publicly releasing themselves from their own fears in the process?

D.S.: A large portion of fears are universal and global. Some of them are justified as well. People seldom worry about something that’s not directly threatening them. From an evolutional perspective, there’s certain logic in that. There’s no use to be afraid of an abstract and remote threat, which would occupy your mind and mess with your hunting and blueberry picking. You are only afraid of the beast, which stands before you and wants to eat you. This is very well illustrated in our present day by the microscopic beast raging across the world. Everyone is afraid and willing to give up a large portion of their freedoms and comfort for the sake of protection. Climate change is much bigger and frightening monster, but it is somewhat abstract and not directly visible. You don’t see it and therefore you push it to the back of your mind and don’t think about it. No one (myself included) is ready to sacrifice the amenities and freedoms he or she is used to, in the fight with that beast.

All this is constantly present and reeling in my head and I need to share it. I believe that if these fears are presented in ways other than some boring statistics or a tear-jerking video of burning rainforests, there’s a higher probability that they would affect the viewers on a subconscious level and make them think and change a little something in their daily life, which would have a positive effect.

M.V.: I’d like us to talk some more about your project New Life for the Past from 2015. It is a devastating visual criticism on the current state of ancient remains in Bulgaria, the cheapening of the past and the transformation of historical ruins into prop-like tourist attractions. You presented that work in several countries, including at the Sidney Biennial. To attain the final result, you made an in-depth research and visited almost all parts of the country. What can persuade an artist to leave his studio and inflict on himself the discomfort of crashing physically and mentally with the rough reality out there?

D.S.: Before I started living in the countryside I haven’t’ had a studio. I’ve always worked in a corner (varying in size) somewhere. Anyway, my first projects involved photographs and video so my studio was a laptop. That is why I’ve never felt discomfort to leave a space and go somewhere for a shoot. It was very important for me to make New Life for the Past. It is just horrible that so many sites of cultural and historical importance, bearing proudly age-long traces of countless wars and disasters, were destroyed within a decade because of the greed and poor taste of a handful of people. Those deeds are comparable with the destruction of the Buddhas of Bamiyan or the demolition of Palmira. With the major distinction that here the destruction took place in peace times and with the help of multi-million EU funding. 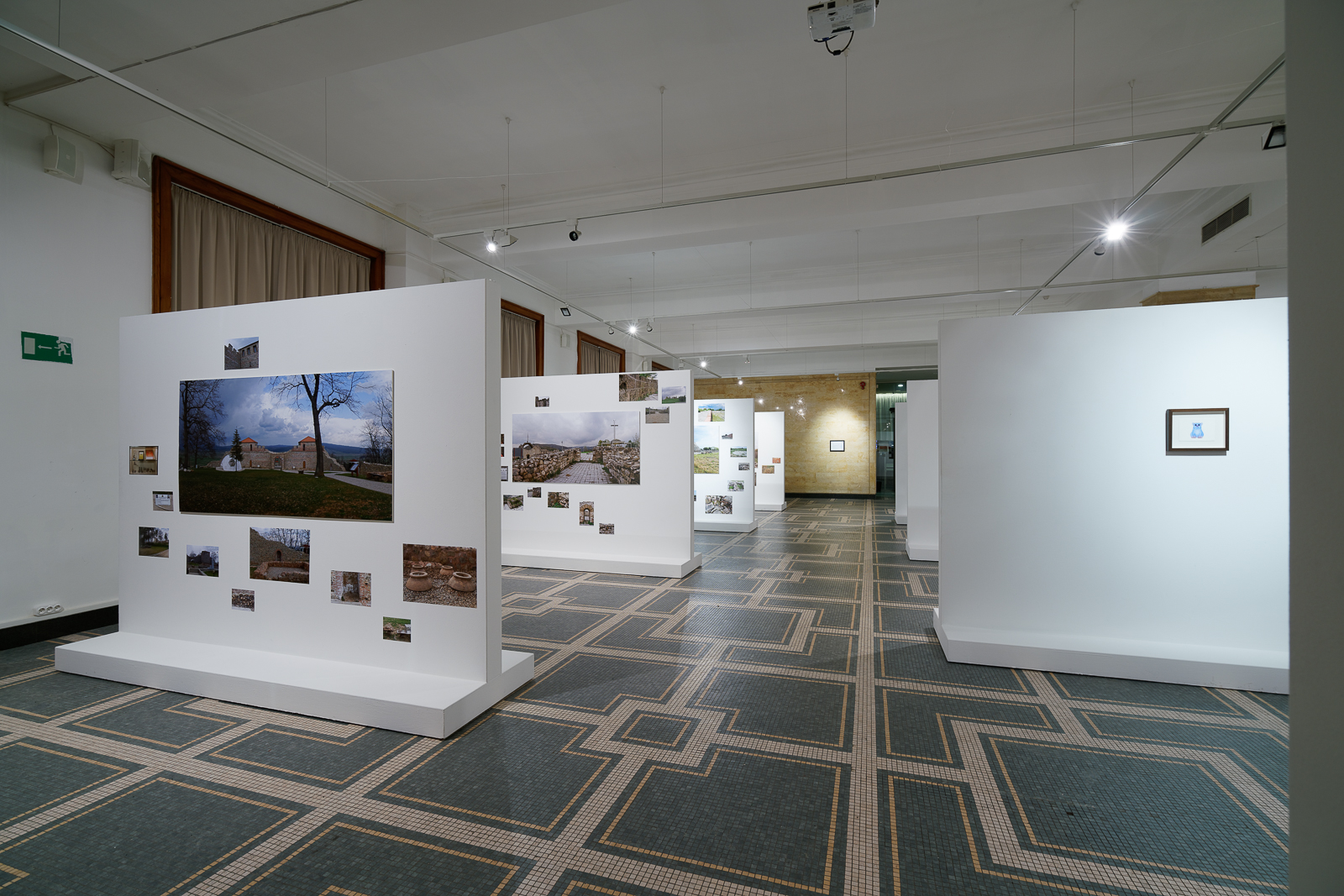 M.V.: There is something very interesting in your work – on the one side, an extremely personal narrative and fixing on the slightest details of your lifestyle, and on the other – an attempt to capture the bigger picture of universal processes and developments. How can these micro and macro interests be combined? Which is more important for you as an artist, the self-portrait or the portrait of the world around us?

D.S.: The simultaneous presence of these two worlds give me a sense of proportion. Also, the existence of the one endows the other with a meaning and vice versa. I cannot place the one world over the other, for me they are connected. My life is the outcome of millions of years of evolution and the reality of the collective attainment of some civilizational level, which allows me to even realize that fact, is incredible. At the same time, on a cosmic scale, we are insignificant and our entire history is contained in the blink of an eye. All of this is pure magic to me.

M.V.: You work on a solo exhibition at Structura Gallery. Tell us about the concept and how do you intend to materialize it. Has the current situation changed the initial plan in some way? In your opinion, what will be the people’s focus of interest in several months’ time, when the show is scheduled to take place?

D.S.: The centrepiece that I will exhibit at Structura is called Self-portrait 2018. As the title shows, this is my self-portrait from 2018, which includes a multitude of objects, plants, insects, photographs and videos directly linked with the year in question. All these “things” will be energy supplied by cables coming out of my 3D printed head, which hangs on these cords in the centre of the room. The large gallery space will allow the components of the work to “explode” from my head and to spread in all directions. I intend to display smaller pieces as well, some of which are still a work in progress. Obviously, this pandemic has its effect on me. I hope we all will be alive and well so that we can meet for the opening in September. I think the people will need something different from populism and statistical analyses to help them recover from the ongoing global trauma. And I believe art can be that thing.